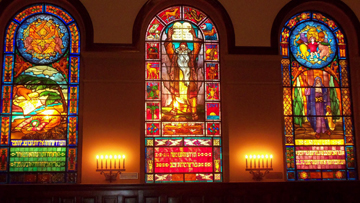 A stained glass window at Temple Emanuel in Beaumont. This year Christmas and Hanukkah will cross over.

Christmas and Hanukkah start at the same time

This year, Christmas won’t be the only holiday observed on December 25.

Hanukkah will start on Christmas Eve and last for eight days.

The last time the Jewish holiday crossed over with Christmas was 2011, according to a USA Today article. That year, Dec. 25 fell roughly in the middle of the Festival of Lights, as it will again in 2019. Rarer are the years when Hanukkah starts precisely on Christmas Day, as they did in 2005 and 1959 before that.

So why all the moving around? Rabbi Benjamin Blech, a Talmud professor at New York City’s Yeshiva University said, Hanukkah falls on the same date every year — just not on the calendar most are used to. Jewish holidays are based on the Hebrew Calendar, which is lunar, he said, as opposed to secular Gregorian calendar used by much of the world, which is solar.

“In the Bible, God tells the Jewish people to look at the moon and count the days from there,” Blech said. “The moon goes through its phases. It’s obvious. It can be seen and record time.”

The trouble, he explained, is that a lunar year lasts about 354 days, far shorter than the 365 and a quarter days that make up the secular solar year. Muslims, who set their holidays on their own lunar Islamic calendar, ignore the difference. That’s why the holy month of Ramadan moves about the Gregorian calendar, creeping back about 10 days each year.

The Hebrew calendar makes up for the difference, however, by adding a leap month during seven of every 19 years, Blech said. That’s because the Bible dictates that another Jewish holiday, Passover, must fall in the spring.

“The minute you’ve got a leap month, you are now a little bit ahead of normal,” Blech said.

And so Hanukkah keeps moving, on most calendars at least. It bumped back to November in 2013, resulting in Thanksgivukkah.

Locally, Allison Nathan-Getz, Jefferson County tax assessor-collector and president of the Temple Emanuel in Beaumont said Hanukkah is a story about a group of people, the Maccabees, who defeated the Syrian Army. That event happened during the year 168 BCE.

“There was a big battle. There was a thing called the Eternal Light in the Temple in which it burned all the time,” she said. “There was only enough oil for one day and the oil burned for eight more days. That was the miracle and we have the Festival of Lights.”

In addition to Hanukkah, there is also Rosh Hashanah that is the Jewish New Year, Yom Kippur that is the Day of Atonement, Sukkot that is the Festival of the Harvest and Passover that is a “huge holiday” around Easter in which the Hebrews fleeing Egypt under Moses is memorialized.

Nathan-Getz said observing the holidays gives her a historical perspective of her family.

Her great-great grandfather was the first rabbi in Beaumont. He came in 1895. Six generations of her family have been raised at the temple and she is the fifth generation to be president of the synagogue.

“I have a deep feeling for the history of my family here,” she said. “I hope we will still have a temple. Our membership has dwindled tremendously in Jefferson County. We’re down to 100 families. We used to have a synagogue in Port Arthur.”

“No new people are moving here and the young are not sticking around.”

In the past, there were several Jewish businesses in Beaumont and Port Arthur and families.

On a brighter note, Temple Emanuel is still the only synagogue between New Orleans and Houston who had a fulltime rabbi.

Unlike Christians who can choose to attend another church, Temple Emanuel is the only option for Jews in the area.

“We have our temple; that’s it,” Nathan-Getz said. “I think it’s important to a community to have all religions represented.”

“We want to reach out to those who aren’t Jewish and tell them about us.”

“Here comes the King, here comes the big Number One! Budweiser beer, the king is second to none. Just say... read more