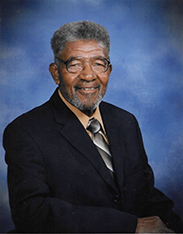 Alfred James Beverly, Sr. was born on October 9, 1932, in Evergreen, Louisiana to Foster Sr. and Elsie Sumbler-Beverly. He accepted Christ and was baptized at an early age by Rev. C. W. Woods at St. John Baptist Church in Evergreen, LA.
He married the love of his life, Audrey Ray Goudeau and together they were blessed with the birth of three children Arlicia, Arnita, and Alfred II.

Mr. Beverly was the owner and operator of A. Beverly Tractor Service as an Excavating and Grading Contractor and worked until his health began to decline.

Bro. Beverly served as a Deacon for years throughout the course of his life and continued to serve faithfully at Antioch Missionary Baptist Church under the Pastoral Leadership of Dr. John R. Adolph.

He leaves to cherish his memory, his devoted wife of 58 years Audrey Goudeau-Beverly, two daughters, Arlicia Albert (Wendell) and Arnita Williams (Taza), and one son Alfred Beverly II (Starla), 8 Grandchildren and 2 Great-Grandchildren, devoted niece, Cheryl Hammond (Micheal): son by citizenship, Ciro (Socorro) Estupinan; two brothers-in-law and four sisters-in-law. His memory will forever be etched in the hearts of a host of nieces, nephews, cousins and friends.

A visitation is scheduled from 9 AM – 11 AM on Thursday at Antioch Missionary Baptist Church. The funeral service is scheduled for 11 AM with Dr. John R. Adolph officiating. Burial will follow in Live Oak Memorial Park under the direction of Gabriel Funeral Home.