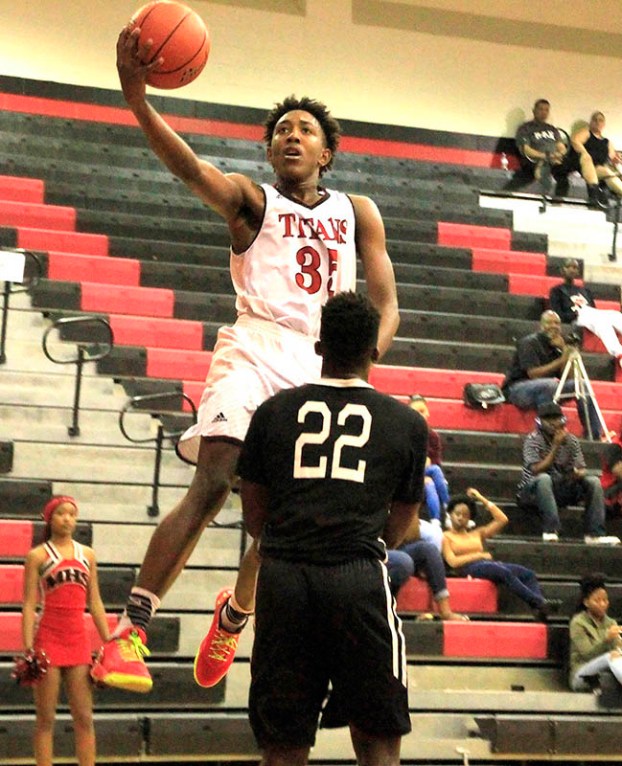 Thailan Wesley of Memorial drives to the basket for a made layup and avoids the offensive foul against Isaac Allen of RCHA on Saturday. (I.C. Murrell/The News)

Titans warm up house with defense in blowout win

Port Arthur Memorial is starting to play the way coach Kenneth Coleman envisioned the Titans would.

“We’re getting better and better at it,” Coleman said. “The thing is, though, that we have a certain way to be up-tempo. But the bottom line is, we have to be able to play any kind of way. We have to make adjustments.”

“We could have played harder than we did today,” Wesley said. “We’re going to come back and get in the gym and grind some more for the next game.”

Now, the Titans (9-4) have to wait 10 more days before taking the home court again for the James Gamble Classic. They might not mind; they had played the past 10 games on the road, including eight in two grueling tournaments.

RCHA (6-4), based in Houston, took over the schedule for Fallbrook Christian, which according to coach Ed Chung, did not field a team before the season. This is the second varsity season for the Pride.

A close game for just more than 4 minutes immediately turned into a Memorial rout, thanks in large part to defense and solid interior passing. Memorial employed its full-court press to disrupt the Pride’s rhythm and create fast-break opportunities off turnovers.

“We still get a little bit antsy on the half-court offensive side,” Coleman said. “If we don’t get a fast break, we ought to be a little more patient. But they are coming around. I can see the improvement.”

RCHA pulled within eight points, 27-19, midway through the second, but would come no closer after that. Wesley scored eight points in the first period and nine in the second.

The Titans all but put the game out of reach with a 23-7 third period.

The Pride found their bright spot outside the arc, where they made nine three-pointers. Jyson Butler connected on three for Memorial.

“We really gave up too many three-pointers,” said Coleman, whose team made five. “We want to make you put the ball on the floor.”