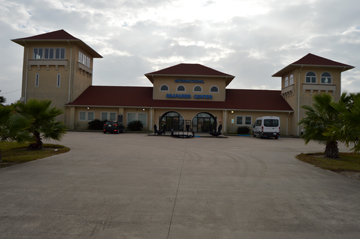 The KCS depot at 401 Houston Ave. in Port Arthur was rebuilt in the 2000s and is a replica of the original train depot that was razed in 1969.

A second life for the train depot

Port Arthur was treated last week as the KCS Holiday Express made its way to the site of the historic depot that now serves as the Port Arthur International Seafarers’ Center at 401 Houston Ave. in Port Arthur.

The depot was rebuilt in the 2000s and is a replica of the original train depot.

But then again, the Kansas City Southern Railroad has played a pivotal part in the history and development of Port Arthur.

The KCS Holiday Express was created in 2001 as volunteers dedicated more than 8,000 hours to transform retired rail cars, according to a prior News article. Today, these cars feature a smiling tank car named Rudy; a flatcar carrying Santa’s sleigh, reindeer and a miniature village; a gingerbread boxcar; the elves’ workshop; a reindeer stable; and a little red caboose.

KCS employees, vendors and friends provide donations that are given to the local Salvation Army at each scheduled stop, according to the KCS website.

The text for the 2009 historical marker reads as follows:

The city of Port Arthur was platted in 1895 as the terminus of a railroad envisioned by Arthur E. Stilwell as the shortest route from Kansas City, Mo. to the Gulf of Mexico.

Trains were required to follow a circuitous route to reach Port Arthur until the direct KCP&G line was completed in Louisiana and Texas. Stilwell’s intention to create a vibrant port city was soon realized.

A canal was rapidly dug to connect the city, on the shores of Sabine Lake, to Sabine Pass, enabling goods to be shipped in from the Gulf of Mexico. These goods were then transported by way of the rail line into the interior of the United States.

The railroad also served to draw people to the new town. Excursion trains brought developers, investors and potential residents to Port Arthur and the surrounding area. Local passenger service to and from Beaumont three times each day was provided by the KCP&G and later the KCS until the interurban railway between Beaumont and Port Arthur was established in 1913. Long distance passenger service was also offered between Port Arthur and Kansas City until May 1968.

By that time, the freight office had moved to the new KCS freight yard and the administrative offices had moved to Beaumont. The passenger depot was razed in January 1969, marking the end of the passenger train service era in Port Arthur.

Christmas for more than 400 children will be a bit brighter thanks to Port Arthur Police Blue Santa Program. Families... read more