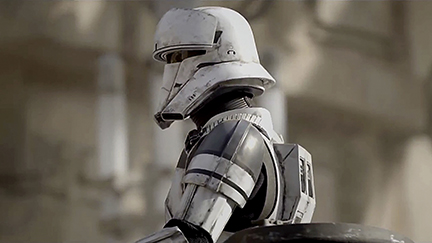 Rogue One: A Star Wars Story

“Star Wars” fans are buzzing, but they’re also a bit uncertain about a new addition to their beloved cinematic franchise. The new movie, “Rogue One: A Star Wars Story” isn’t part of the main thrust of the “Star Wars” narrative, but rather a stand-alone story that expands the universe rather than push the overall saga forward.

Because of that, fans are worried that the filmmakers won’t put quite as much loving care into this movie. Disney has even taken steps to tamp down expectations on this latest film, all of which has cynics fretting that this is just a shameless cash grab of a movie, rather than anything of genuine value.

I’m thrilled to report that “Rogue One” works well as a solid addition to the “Star Wars” franchise, although it certainly doesn’t rise to the standards set by last year’s “The Force Awakens.” Still, there’s plenty to get excited about in this latest story set in George Lucas’ beloved universe.

Set in the days before “Star Wars” Episode IV, aka the original film, this new movie prequel centers on Jyn Erso (Felicity Jones). She is the daughter of a scientist who is building something terrible for the Empire. She teams up with a band of plucky fighters to get to her father, and ultimately steal the plans that will become so critical to future Rebel Alliance plans.

Diego Luna, Donnie Yen, Wen Jiang and Alan Tudyk round out the cast of good guys, while Ben Mendelsohn serves as the film’s main villain. All of them play serviceable characters, although none of them are so memorable that they would warrant spin off movies of their own. They are also quite expendable, and since we know that they aren’t in the other “Star Wars” films, their fates give this latest film an unsettling aura of uncertainty.

Indeed, the entire film has many dark moments that should give parents pause before taking the entire family out to the theater. I’m not saying that there’s anything inappropriate for small kids here, but rather that this film deals with weighty topics like sacrifice and the brutality of war, which might be a little too harsh for younger children just hoping for a simple space adventure.

It’s not all doom and gloom, and there are plenty of funny bits and Easter eggs for the fans to discover. The battle scenes are terrific and the special effects are top notch. The only failure comes with the simplistic story and shallowly drawn characters. These elements aren’t bad, they simply don’t live up to the epic standards set by the previous seven films.

All things considered, “Rogue One” is a good film that will definitely please “Star Wars” fans provided that they take it as an interesting side adventure rather than a giant part of the overall saga. Most important, for Disney, it will keep fans satisfied until episode VIII arrives on December 15th of next year.

THE MOVIE GUY: ‘Nocturnal’ one of year’s best

Tom Ford’s new movie, “Nocturnal Animals” is one of the most beautiful, and most disturbing movies of the year. This... read more