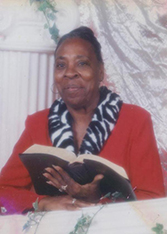 Mary Ann Isadore Reed, 72, of Port Arthur, TX died December 9, 2016 surrounded by family at her residence. She was born and raised in Port Arthur, TX. Throughout her beautiful life, she worked a few careers but her most rewarding job was with Cresthaven Nursing Home which is where she stayed employed until she was unable to work.

Visitation will be scheduled from 9 am to 11 am on Saturday, December 17, 2016 at New Day Deliverance Holiness Church in Beaumont, TX. Funeral service will be11 am with Apostle McKinley August, Jr. officiating. Burial will follow in Live Oak Cemetery under the direction of Gabriel Funeral Home.

Keethan “KeeKee” Carter went to be with his heavenly Father on December 9, 2016. Born in Port Arthur September 7,... read more