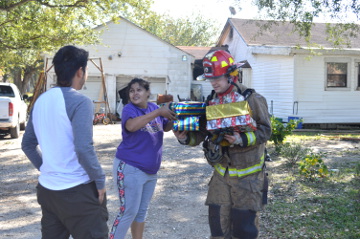 A Port Arthur firefighter brings salvaged Christmas gifts to a homeowner after a house fire in the 3000 block of 26th Street on Thursday. Mary Meaux/The News

Local firefighters were busy battling two house fires, one in Port Arthur and another in Nederland.

Firefighters in Port Arthur were called to the 3000 block of 26th Street around 11 a.m. for a house fire. 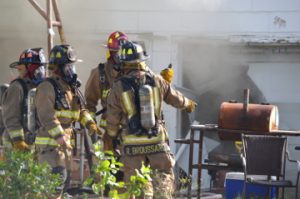 Port Arthur firefighters map out a plan to extinguish a fire at a home in the 3000 block of 26th Street on Thursday.
Mary Meaux/The News

One resident was home at the time of the fire and was checked out by emergency medical personnel but no treatment was required, PAFD Battalion Chief Mike Free said.

Fire trucks lined the street as thick smoke billowed from the home and garage. One neighbor brought out chairs for the homeowner to sit in while EMS looked her over. 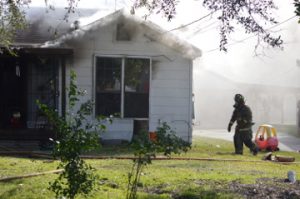 A Port Arthur Firefighter walks past a child’s toy while working to extinguish a house fire in the 3000 block of 26th Street on Thursday.
Mary Meaux/The News

After the fire was under control a firefighter emerged from the scorched home carrying Christmas gifts and gave them to the homeowner and neighbors.

The cause of the fire appeared to be due to clothing left too close to an electric space heater, LaRisa Carpenter, public information officer, said.

There was significant damage to at least half of the home but it was not a total loss.

Four children and two adults live in the home.

A home was totally destroyed by fire in the 200 block of Chicago in Nederland Thursday morning.

Nederland Assistant Fire Chief Terry Morton said flames were visible when firefighters arrived and no one was at home at the time.

Firefighters were on scene for more than four hours.

One firefighter received a minor injury but will recover, he said.

Red Cross was on scene and visited with the family, Morton said.

The Port Arthur City Council received an update on the status of the proposed city logo/slogan though some councilmembers said... read more