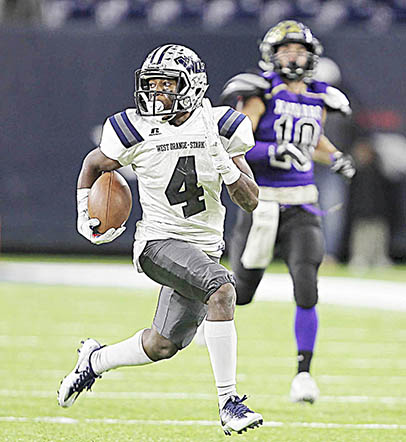 They are key ingredients for a successful run for a football team getting ready to participate in their third straight Class 4A Division II State Championship Game.

Without question, West Orange-Stark receivers Kentavious (KJ) Miller and Keion Hancock fit that description.
The two standouts have been such key cogs in the Mustangs’ run, especially the last two seasons in which they’ve compiled a 30-1 record and a state title last year.

The two are all about winning and celebrating team success for head coach Cornel Thompson and Co.

The two have posted amazing numbers. Those numbers could be much higher, they totally understand that, as they prepare for the Class 4A Division II State Championship Friday at AT&T Stadium in Arlington against Sweetwater.

“We’re thrilled to be back playing for it all again,” said Miller. “We’ve had the goal of winning another one as soon as we got back home from winning the last one. As seniors, we want to cherish these moments for the rest of our lives.”

“One team, one dream,” said Hancock. “That’s been in our minds all season long. We know we’re so close to getting there. Coach T (Thompson) talks about 48 minutes more. Now, as seniors, we know it’s our last 48 minutes and we’re ready to go out and perform.”

Perform. That’s something Miller and Hancock have mastered.

What else does he do? Well, he’s been the punter the last two seasons and the holder on point-after and field goal attempts. And, yes, he has played defense the last several games. In the 49-7 rout of Navarro in the semifinals last week he had a 65-yard punt return for a score and a 72-yard interception return for a TD as well.

“I love getting my hands on the ball and being part of the game,” said Miller. “My main thing is trying to make a big play for our team any way that I can and get us going.”

He has certainly done that, especially getting the Mustang crowd frantic by getting them rowdy and standing with his big-play capabilities.

“I love to hear about that,” said Miller. “That’s really great. I really don’t hear it when I get the ball because I’m so focused in on what I have to do once I get it, like following our blocks and trying to make the right cuts and things like that.”

He has hauled down 67 receptions for 1,055 yards and 10 TDs and has rushed 73 times for 688 yards and 10 TDs.
Pretty salty considering he was sidelined for six games last season with an injury.

“It’s great to know that KJ and I are depended on to make big plays from our teammates and that they have confidence in us and what we can do,” said Hancock. “I just want to do what ever I can to help us be successful. I can remember last year sitting out those games and I was dying to get back in there. My teammates, they were such great support for me during that and I’ll never forget that. We’re like one big family here and we always have each others’ backs.”

The two don’t really think about what their numbers could actually be during this torrid run the Mustangs have been on.

Many times over the course of the 30-1 run, Miller and Hancock have been watching from the sidelines in blowout wins as early as the third quarter. The Mustangs have outscored opponents 1,458-231 during the stretch. The two have combined for 4,630 all-purpose yards and a whopping 54 TDs.

“We know what we can do, so numbers don’t mean that much,” said Miller. “It’s all about being part of championships and being around a great group of teammates and coaches. A lot of sacrifice goes into it. We have so many players that can get it done. We’ve won a bunch and everyone gets involved and that’s the way we like it. It keeps the other team guessing on who will be coming at them next.”

“We don’t worry about the stats much at all,” said Hancock. “We don’t care how we get to the end zone as long as we get there. It takes everybody on the field each time we go out there and it doesn’t matter who gets the glory. It also helps keep us healthy and fresh.”

Now, just the Sweetwater Mustangs stand in the way for a repeat for the standout seniors.

“We’re so close, we can taste it,” said Hancock. “We realize we have 48 minutes from reaching our dreams and Sweetwater is a great team too. We’ve gotten too far and we want to finish it. To have an opportunity to play in three State Championships in a row, not many players can say that. It’s been so great playing with all these guys.”

“We remember all the sweat that has gotten us here and that goes all the way back to our PeeWee football days and we will always remember how close we have all been since then and how much of a ‘family’ we are,” said Miller. “We remember when we were eight and nine-year olds watching the Mustangs play and thinking together how we were going to win some state championships. Now here we are, with a chance for two of them. The thing about us, we stay humble and we play together. I can’t wait to get out there one more time and be with all the guys, that’s what it is all about.”

NEDERLAND — The Bulldogs were made for these moments. Three days after hitting a buzzer-beating three-pointer to win, freshman guard... read more