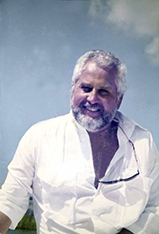 Sonny’s family shortly moved back to Port Arthur after his birth, where he grew up and attended school. He met the love of his life, Roxie Gabourel, in junior high. They remained happily married for fifty-nine years.

He and Roxie graduated together from Thomas Jefferson High School in 1956. They married shortly after in June of 1957. Sonny attended Lamar State College in Beaumont. He started business with his father, at Lawson’s Auto Salvage in 1960, which he went on to own and operate following his father’s death, until 2001.

Sonny was an avid hunter and fisherman, loved the Dallas Cowboys, and anything with a motor in it. He had a passion for motorcycle riding and vintage cars. He rebuilt and refurbished a 1954 Corvette given to him by his father when he graduated from high school. He passed the car on to his beloved daughter, Paige. He bought his first boat, ‘The Good Spot,’ in which he won many offshore fishing tournaments.

Aside from his great passion for the outdoors, his family was the main love of his life, including his daughter, Paige, and his granddaughter, Elizabeth. When he and Roxie moved to Beaumont in 1996, he joined Trinity United Methodist Church and was an active member in HAMACO Sunday school class, as well as the Trinity Army. All of the members were a huge source of support during his illness. Honorary Pall Bearers will be the members of the HAMACO Sunday school class.

The family would like to extend a special thank you to the staff at Harbor Hospice and Touched by an Angel Private Care Facility.

Mr. Lawson’s funeral service will be at 11:00 a.m., Thursday, December 15, 2016, followed by a reception in the Nita McKnight Parlor, at Trinity United Methodist Church, 3430 Harrison Avenue, Beaumont, under the direction of Broussard’s, 2000 McFaddin Avenue, Beaumont. His committal will be held at Broussard’s Crematorium, Beaumont.