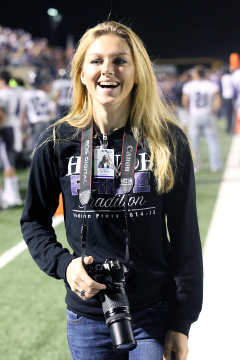 PORT NECHES — Robin Griffin is a familiar sight at just about every Port Neches-High School sporting event but she isn’t an athlete — she’s senior staff photographer.

Griffin, a senior, was always interested in photography but having been to three different high schools during her freshman year was a bit hard on her. As her family moved she attended Livingston then Alvin high schools before landing at PN-G.

“They taught us a totally different way at the other schools than they do here,” Griffin said of photojournalism. “Here, they teach you the settings and how they work during your first year in photojournalism. It was hard but I stayed with it.”

“You name it, she’s been in it,” teacher Janis Ryan said. “And she’s gotten so much better.”

A large photo of the Indian Spirit on the wall of the journalism class was taken by Griffin and was voted as the top photo of the month, an honor, Ryan said.

The frequent moving in her childhood made it difficult to find her niche but now, with a little help from teachers like Ryan, she is moving in the right direction and achieving success at every turn.

“A lot of people here really respect her,” Ryan said. “And for me, she’s an example of someone who is dedicated, very dependable and reliable.”

Griffin makes top grades in school and is looking to become first a registered nurse then a therapist in order to help others.

The busy senior said it’s important to keep a positive mindset as she now looks forward to high school graduate and a bright future.

Pilgrimage honors Our Lady of Guadalupe

The Rev. Urbano Ramirez, pastor of Our Lady of Guadalupe Catholic Church in Port Arthur, said the Feast Day of... read more