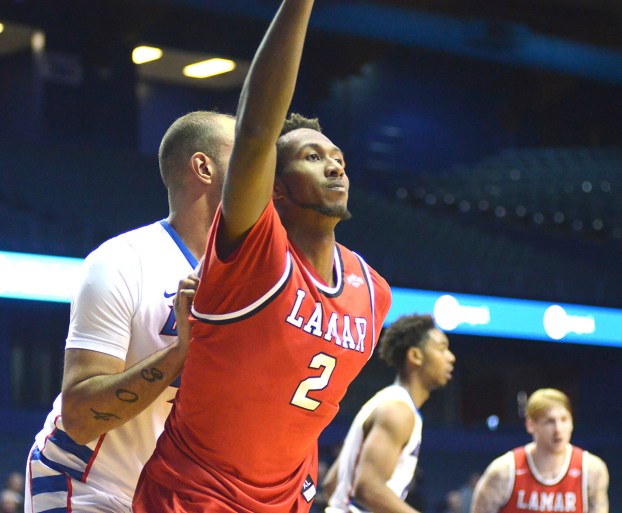 Dorian Chatman of Lamar posts up for the ball against DePaul on Tuesday. (Ricky Bassman/Special to The News)

Cards try to recover from road

Finals week at Lamar can give a student-athlete more than he or she wants to think about.

The exams began a day after the Lamar men’s basketball team closed a four-game road swing with an 80-61 loss to DePaul in Rosemont, Ill. It was the third straight defeat for the Cardinals (4-4).

“If you don’t play ball or never played before, the normal person doesn’t understand when you’re going into exams, there’s some anxiety with the student-athletes,” Lamar coach Tic Price said. “Although we had study hall, there were still no tutors there to get them through if they hit that proverbial wall.”

On top of focusing on exams, the Cardinals also battled sickness and injuries as they wound down a 12-day journey from Prairie View up to Pocatello, Idaho, down to San Francisco and up to Rosemont, a Chicago suburb where DePaul plays many of its home games.

Freshman guard Cameron McGee missed the Dec. 2 San Francisco game with the flu but played 8 minutes at DePaul. Another player had an allergic reaction to a food item and another pulled a stomach muscle, according to Price, who declined to name those athletes.

“There’s good competition playing in a hostile environment,” Price said. “The challenge is to get through all the outside things aside from basketball.”

Lamar wasn’t the same team that started the four-game span strong with an eight-point win at Prairie View A&M in Price’s eyes. The Cards garnered a big victory at Pac-12 contender Oregon State on Nov. 16 during their first West Coast trip.

“I think in the beginning of those two weeks, we played with a lot of energy, a lot of pop,” Price said. “But, as we went into our second phase of the road trip, which was the West Coast, we were a little bit tired. I could tell. The balls we had been getting to initially, we lacked a half-step. I do know part of it, we were road-weary. The other part of it is, we’re going into exams.”

The weekend gives the Cardinals a break from finals week, which concludes this coming Wednesday, and a chance to end the skid at home against Austin College (2-4), a Division III program from Sherman, in north Texas.

“Anytime you go on that long road stretch, it’s hard, especially when you have a new team with a lot of young guys,” sophomore forward/center Dorian Chatman said. “We’re looking at it as, you take finals and now it’s Christmas break. You’ve got time to relax and focus on a lot of home games. You just always feel more comfortable playing at home.”

Four of Lamar’s next five games will be at home, with a visit to UT Rio Grande Valley next Friday following Saturday’s game. The Cards will welcome Liberty (Va.) of the Big South Conference on Dec. 19, Arlington Baptist of the National Christian Collegiate Athletic Association on Dec. 21 and Huston-Tillotson of the NAIA on Dec. 29 to wrap up the non-conference slate.

Chatman, from Port Arthur, has a chance today to build on a season-high 21-point outing against DePaul on Tuesday. He’s the team’s fourth-leading scorer at 6.9 points per game.

“[Price] told me I needed to step up my role and play bigger when he put me in at the 5 [center position], and that’s just what I went in having to do,” Chatman said.

Chatman, who started 18 games last season, played 28 minutes Tuesday, second-most this season only to 31 minutes in a Nov. 22 win over UTSA. His playing time has fluctuated some as the team monitors “physical issues” with his knees that were not specified.

Chatman went 7 for 13 from the floor against DePaul, taking open shots he usually passes up as an unselfish player, Price said.

“Dorian has a lot of potential,” Price said. “When he’s locked in and focused, he does some special things. Dorian can be as good as he wants to be. Early this summer, he easily was our best player.”

ORANGEFIELD — The Nederland Bulldogs started the day off right at the Bill Tennison Memorial Tournament on Thursday, only to see... read more