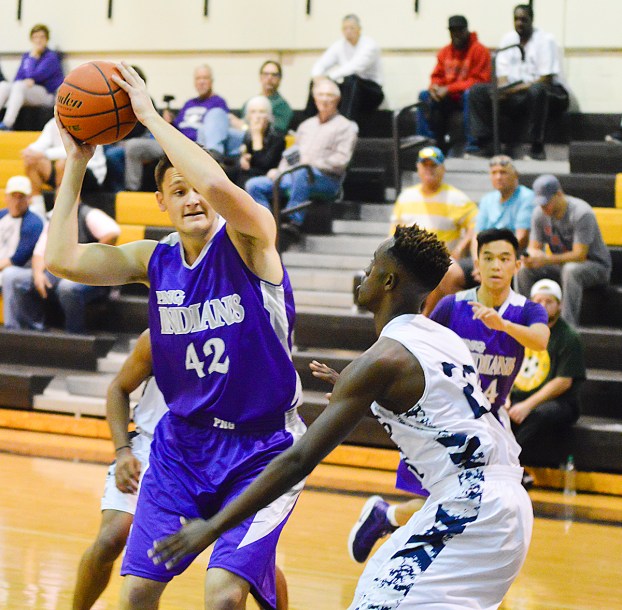 West Orange-Stark’s Tramaine Hancock is happy he can remember some of his players’ names.

The two teams met at the Nederland Bulldog Classic with the Indians winning 59-49 despite shooting 13 of 38 from the free throw line.

“I wish I could say the reason for that is we didn’t practice free throws, but we do,” Abel said. “That is something we are going to have to put a lot more emphasis on. We have to understand free throws and layups are critical parts that we have to finish.”

If PNG (1-3) had lost Thursday, it would have wasted a big performance from its biggest player. Junior Haden Wiggins scored 18 points, 14 coming in the first period.

Hunter Curtis added 10 for the Indians and both Edsel Damo and Trent Lee each had eight.

A WOS (1-2) win would have been huge for Hancock. Yes, it is only an early-season tournament, but consider the fact the Mustangs are without 11 varsity players due to the football team still going in the playoffs.

Hancock said it is very possible all five of his expected starters come out of those 11 players.

“It is hard,” Hancock said. “I know it is going to benefit the team and our program in the end as far as depth. The younger kids I have now playing against this type of quality competition will definitely make them better when it is their time to play.

“They are getting an opportunity a lot of kids do not get,” Hancock added. “I try to explain that to them. It’s hard dealing with young kids who don’t understand the speed and calling of a varsity game. It is going to benefit us in the end.”

The Mustangs held on to the lead heading into the fourth period. PNG did close the gap and trailed 38-35 going to the final frame.

“The kids needed that win,” Abel said. “It was certainly a confidence booster. It maybe stopped the bleeding a little bit. They performed and did what I asked them do to for the most part. It was a good win for them.”

The two teams are back at the Classic today but switch schedules with each other so the WOS players can go to Porter and watch the Mustangs’ football team take on Giddings at 7:30 p.m.

Lamar searching for bounce back tonight in San Fran