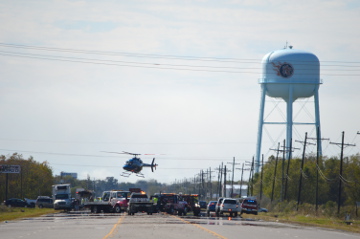 A medical helicopter leaves the scene of a major wreck in the 1600 block of FM 365. Mary Meaux/The News

Emergency crews are working a two-vehicle wreck in the 1600 block of FM 365 that sent multiple people to the hospital.

Another vehicle that was driven by an elderly man traveling east in the turn lane struck the stopped vehicle from behind.

One person from the stopped vehicle is in critical condition.

Three medical helicopters were called to the scene around 12:30 p.m. Thursday.

It was originally reported that the wreck was in the 1500 block of FM 365.

PORT NECHES — A festive tree inside Tranquility Mausoleum lets the public remember their lost loved ones during the holiday... read more