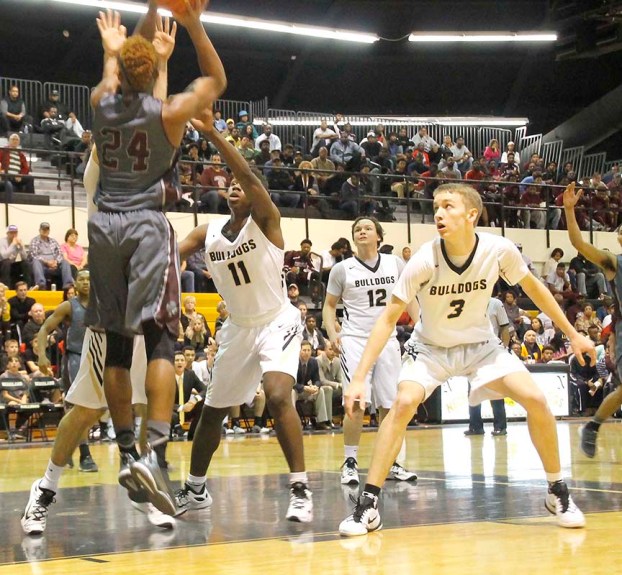 Darrell Jones (11) and Kevin Howard (3), shown in a January game against Central, have powered Nederland to a 3-0 start in time for its own Bulldog Classic. (I.C. Murrell/The News)

NEDERLAND — Darrell Jones has gotten hot at a good time — early in the basketball season.

“It’s just that hunger in us,” Nederland’s standout senior guard said Tuesday. “We just want to keep getting better. We’ve been playing together for a long time.”

On a team that lost nine seniors from last season’s 5A bi-district playoff team, the 6-foot-1 Jones has taken over much of the scoring for the 3-0 Bulldogs, averaging 25 points and seven rebounds per game.

His fast start has come just in time for the 46th annual Nederland Bulldog Classic, one of the premier high school tournaments in Southeast Texas. It’s a chance for the Bulldogs, who won the tournament for the first time last year, to gain some recognition Jones believes the team is missing.

“We’ve got to make a name for ourselves,” he said. “This is my chance to prove myself against some of the best players in the state. It’s my time.”

The Classic is not just another early-season tournament. It has been home to plenty of future Division I players since its inception.

Five of them, Ozen’s Kendrick Perkins, Humble Christian Life Center’s DeAndre Jordan, Lincoln’s B.J. Tyler and Earl Evans, and Central’s Daimon Sweet made it to the NBA, along with Lincoln’s Stephen Jackson.

This year, the Bulldogs will, in a way, share their court with two more future Division I players.

Jarred Vanderbilt of Houston’s Victory Prep has yet to choose from 15 scholarship offers. 247sports.com lists the 6-foot-8 small forward as highly interested in Kentucky, North Carolina, TCU, Kansas and Texas.

Then, there’s Savion Flagg, a 6-6 small forward from Alvin who signed with Texas A&M earlier this month.

Victory Prep and Alvin will each play in a different three-team pool from Nederland’s in the Classic, but there’s a chance the Bulldogs could face either one in the championship round. Louisiana Christian School of Breaux Bridge, which plays Nederland on Friday, and Grace Baptist Academy of Ocean Springs, Miss., have even dropped by for the party.

Good thing for the Bulldogs they’re off to a fast start.

“Playing in a high level and maintaining that high level of play is tough,” 11th-year head coach Brian English said. “We’re going to have to do that to compete in this tournament.”

Nederland is also getting some scoring help from 6-7 senior center Kevin Howard, who is nearly averaging a double-double at 14.3 points and 8 rebounds per game. But the offense isn’t entirely what makes the Bulldogs go.

“It starts on defense,” he said. “It leads to easy points on offense.”

English wasn’t sure how the pieces he had for this season’s team would fit together after losing a big class, but Jones and Howard have helped to calm any fears the coach might have had.

On Thursday, the Bulldogs get a chance to defend the championship they had to wait 45 years to win — and maybe help Jones and Howard make a case for Division I offers.

“It’s a chance to play more basketball and show everybody what we’ve got and try to win again this year,” Howard said.

Change was good: Titans exploded onto 5A scene

The Port Arthur Memorial Titans scored first and then watched the Temple Wildcats score the next 39 last Saturday in... read more