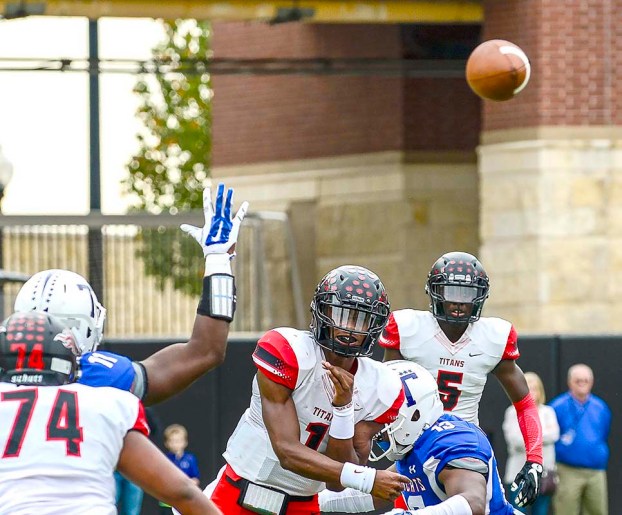 Change was good: Titans exploded onto 5A scene

The Port Arthur Memorial Titans scored first and then watched the Temple Wildcats score the next 39 last Saturday in the Class 5A Division I Region III semifinals.

The Titans were eliminated from the playoffs after a 39-7 loss at Cy-Fair FCU Stadium in Cypress. Memorial’s defeat ended the team’s most successful season since 2011, when the Titans reached the state semifinals and finished 13-2.

This year’s Memorial squad ended the year with an 10-2 record and also brought coach Kenny Harrison his first taste of a district championship.

Memorial’s year started out with a lot of hope and hype. It was announced this past February by the UIL that the Titans would drop from Class 6A to Class 5A and compete in District 22-5A.

Memorial had suffered through back-to-back 3-7 records the past two seasons. The move down was a welcomed invitation for the Titans.

They went 7-1 in 22-5A and shared the district crown with both Port Neches-Groves and Vidor. The Pirates were the first team to beat the Titans this year, winning 31-21 in Week 11.

Memorial had won its previous seven district games until that point by an average score of 43-10.

Hines, the District 22-5A rushing leader through the regular season, finished his junior campaign with 1,661 yards on 187 carries with 21 touchdowns. Hines, in his first season on varsity, did not play against Temple due to a shoulder injury.

Kadon Harrison, a Louisiana-Lafayette commit, made the most of his senior season after missing about half the year last year with a knee injury. He threw for 2,000 yards on 152 of 226 passing with 23 touchdowns and 10 interceptions.

“It has been a great four years playing for my dad and coach [Cornelius] Harmon,” Kadon said after the loss to Temple. “I never thought it was going to end. I don’t even know how to act right now. I am so used to being around my dad every day in practice. It was what became normal.”

The father and son will have to find a new normal now. It was a situation that coach Harrison found a little hard to talk about even on Monday.

“Being around my son the last four years during football has been one of the best experiences of my life,” the coach said. “It is definitely starting to sink in that he is a senior and will be moving on. It will be an empty space and void in my heart. I wouldn’t change anything about these four years for the world. Both the good and bad times helped us grow as a father and son. I really enjoyed it.”

While Hines and Kadon Harrison, along with guys like De’Andre Angelle and Adrian Williams, were helping the Titans average over 400 yards a game on offense, Haug and Vincent were busy being very stingy on defense.

The Titans finished first in total defense in District 22-5A, and a lot of that had to do with the play of Vincent. He picked off eight passes this year, returned three for touchdowns, had two pick-sixes in the same quarter against Nederland and was named 22-5A’s defensive MVP for his efforts.

He was not alone on defense. With help from linebackers Odis Mack, Barnes and Jomard Valsin, the Titans pitched two defensive shutouts this year and had allowed only 17 points total in their first two playoff games against New Caney Porter and Fort Bend Elkins.

“It was a hard-fought season,” Vincent said following Saturday’s loss. “My brothers and I fought real hard. I never gave up on them because my teammates never gave up. I hate to see this season end but I enjoyed this year. This year was very surreal. We were really blessed regardless of how some might look at it. There are a lot of teams that didn’t make it this far. I am thankful to have had this opportunity.”

CYPRESS — As great as the Port Arthur Memorial Titans’ season had been all year, it ended with an equally... read more