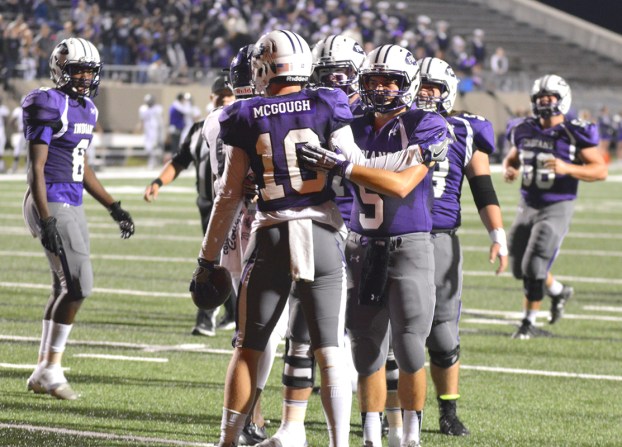 Dylan McGough of PNG reacts to scoring a touchdown in the first quarter of Friday’s 5A Division II playoff game against College Station. (Gabriel Pruett/The News)

BAYTOWN — It had been six years since Port Neches-Groves played in a third round of the UIL state football playoffs.

It had been seven since PNG won 11 games.

The Indians achieved both in 2016 under coach Brandon Faircloth, who summed up the season in one way: History-making.

“The most successful one we’ve had since I’ve been here,” Faircloth said after Friday’s 52-28 defeat to College Station in the 5A Division II Region III semifinal. “You know, the loss stings pretty hard, but after a few days — that’s what I told the guys — you’ll wake up and start thinking about everything you accomplished, from being district champions to going three rounds deep in the playoffs.”

PNG shared the District 22-5A championship for the second year in a row.

A throng of PNG supporters, many of whom attended the

Indians’ Thanksgiving morning practice, waited just outside the locker room waiting to greet the “home” team at Stallworth Stadium. PNG had gone 3-0 at the Goose Creek ISD-owned stadium this season before Friday and was the home team for the area-round win against Fort Bend Willowridge and the loss to College Station.

College Station (13-0) had a throng of supporters as well a day after Texas A&M’s Thanksgiving tussle with LSU, and they saw the Cougars make history of their own in reaching their first regional final, where they’ll take on Fort Bend Marshall next weekend. College Station High was established in 2012.

“It’s an opportunity of a lifetime to be a part of history and a part of College Station High School,” running back DaDa Anderson said. He rushed 17 times for 159 yards, including 65 yards on a one-play drive that put the Cougars up for good at 28-21 in the second quarter.

College Station led 38-21 at halftime, but two bad snaps in punt formation that led to touchdowns helped separate the Cougars from the Indians. At one point, however, PNG matched College Station score for score on three consecutive drives.

Faircloth figured the game might turn into a track meet.

“I knew they had a great offense,” he said. “I think we’re pretty salty, too, on offense. You don’t really know what to expect in the third round of the high school playoffs.”

The College Station defense recovered a low snap on PNG’s opening drive and returned it 16 yards for six points. The second bad snap, shortly after Anderson’s long run, led to a punt from the end zone that did not reach the line of scrimmage, allowing College Station to score three plays later.

“Defense absolutely set the tone for us,” Anderson said. “It was a couple of mistakes, but we overcame them and we executed out there.”

Dylan McGough finished his PNG career catching five passes for 111 yards and two touchdowns, raising his playoff total to six TDs. But he saw firsthand how explosive College Station can be.

“They’re obviously another level than we are,” McGough said. “We stopped them a few times, but they have a really good offense. I can see them going all the way. It’s just tough. We made a good run. It’s all we can do.”

PNG turned heads this season with the outstanding run-and-pass play of a sophomore, Roschon Johnson, at quarterback. Among the many accomplishments the Indians made, 2016 will be well remembered for his nearly 4,000 total offensive yards (2,364 passing and 1,488 rushing unofficially).

“He’s going to have every school going to want him [for college],” McGough said. “I can see it. The kid’s amazing. We wouldn’t be here without him.”

For such a memorable season the Indians had, Faircloth challenged the seniors, who are two-time district co-champions, to not let PNG football be the greatest thing they accomplished in life.

“Go on and use the tools that football teaches you and be a successful businessman in whatever you do,” Faircloth said. “Go be a great dad and husband. Those are the things we want them to take in their lives. PNG football is going to be a blink in their eyes. …

“Let’s not be the guy who’s 35 years old who still talks about high school football. Let’s go do something with our lives. We’ve got a group of seniors who I feel confident are going to do that.”