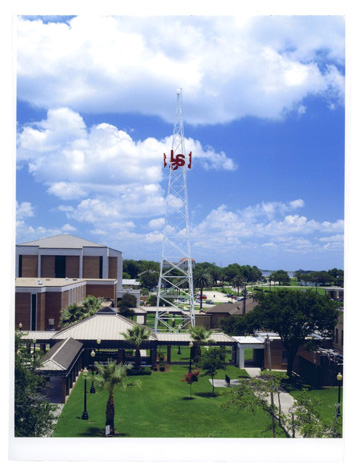 The radio tower at Lamar State College-Port Arthur was donated by the Marconi Wireless Telegraphy Company to the college's students for training in telegraphy.

Distinctive campus tower goes back to early days of radio

Port Arthur College was a pioneer in the field of radio in the day of its infancy, according to Port Arthur Centennial History 1898-1998.

The school even had a tie to the inventor of the radio, Guglielmo Marconi.

“Further, an evolving technology known as telegraphy and telegraph engineering was also taught, training persons primarily for railroad stations work. To support the telegraphy, Mr. (John W.) Gates persuaded the Italian company which had invented what we call radio today, the Marconi Wireless Telegraph Company, to donate a tower and other equipment for use by the students. The equipment valued at $5,000, included various types of tuners, detectors, a high grade aerial, and two-kilowatt transformer, which in effect established a wireless station on campus,” it read.

The text for the 1988 historical marker is as follows:

Originally towering 180 feet above the campus of Port Arthur College, this radio tower was constructed in 1909. Due largely to the efforts of local community leader John W. Gates (1855-1911).

The college offered instruction in wireless telegraphy. Equipment for the tower was donated by the Marconi Wireless Telegraph Company.

Later adapted for radio broadcasting, the tower is no longer in use, but stands as a reminder of Port Arthur College and its early innovative programs in the field of communications.

Hospitality Center gives reasons to give thanks for the holiday

Many individuals were served meals Thanksgiving Day as the Hospitality Center in Port Arthur opened its doors once again to... read more