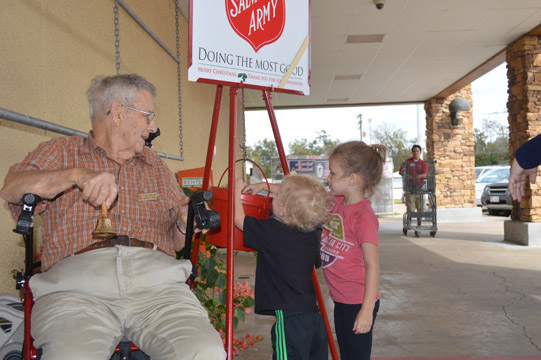 Ringing the bell for more than 30 years

If one was to shop at the Bruce’s Market Basket in Groves during the holiday season, one may come across one of the kettle workers from the Salvation Army ringing the bell for donations.

One red kettle worker in particular has been ringing that bell for more than 30 years.

Tom Dunlop, 90, has been working with and volunteering for the Salvation Army since the 1980s. He is on their advisory board.

“I enjoy ringing the bell and meeting nice people,” Dunlop said. “It means a lot to do this and to help people that need help.”

Dunlop accepts donations while seated on his carrier; but that does not seem to prevent him from serving the community in the best way he can.

“I can’t do much these days, but I can do this,” Dunlop said. “I thank the good Lord for being able to do this much.”

Dunlop expressed the desire for more individuals to get involved with charity work.

“I wish more young people would do this. I think they’d get some sense of appreciation from it,” Dunlop said before noting some of the benefits of his volunteer work.

“I get to talk with other people. I appreciate that other people get to do something for the community.”

“I do this seven or eight times a season,” Dunlop said. “The Market Basket stores are so kind to us.”

When asked about his ease and his good rapport with people, Dunlop did not attribute it to anything special.

“I just enjoy the people and thanking them for their generosity,” Dunlop said. “I’ve had some contribute up to $100.”

Dunlop did express importance of saying “Hi” to anyone who passes by.

“I think it’s important to speak with everyone who you see. It shows them that they’re important.”

Asked what made him start working with the Salvation Army, Dunlop said, “I just wanted to help the community. I just feel that everyone should give back to the community.”

Dunlop explained a little bit about his role on the Salvation Army advisory board.

“When the Major has a problem, like looking for advice or counsel, he’ll ask us. Our obligation is to get out in the community and raise funds.”

Dunlop made certain to credit the head officers in the Port Arthur branch of the SA.

Because of his longtime association with Salvation Army, Dunlop said that he has seen many changes in the public.

“The community has changed a lot over 30 years,” Dunlop said. “We have a lot of good people here.”

Dunlop estimated that he goes through one kettle a day with public donations; although, that estimate does change for the holiday seasons.

“On days like this, before the holidays, people can be very generous,” Dunlop said.

In fact, on the second day before Thanksgiving, Dunlop had to request a second kettle by noon of that day.

In Dunlop’s estimate, the Salvation Army raises around $40,000 over the entire Christmas season.

“I can do something like this to help other people,” Dunlop said of his own part in it.

Dunlop made special mention that a member of the community will be matching donations from a red kettle on a certain day in December, up to $500 worth.

“Nobody’s ever done that before,” Dunlop said.

Port Arthur Police Lt. Frank Ramirez has been promoted to the position of police major/deputy chief within the department. The... read more