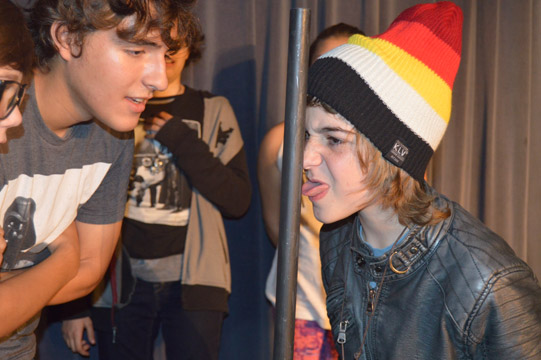 On a triple dog-dare, Flick (Noah Hardy) gets his tongue stuck on an icy pole in rehearsal of "A Christmas Story." (Lorenzo Salinas/The News)

“Be careful what you wish for…” because you might end up shooting your eye out.

The Port Arthur Little Theatre will hold performances of “A Christmas Story” on the weekends of Nov. 18-20 and 25-27. Tickets will be $12 for the general audience, $10 for seniors and $6 for active military and teachers.

The play should be familiar to anyone who has seen the movie — and that familiarity is intentional.

“The play follows very, very closely to the movie and we have tried to be (faithful) to it,” Debbie Pletcher, the director, said. “That’s because anyone who comes to see it expects to see the movie.”

“I think it’s a good thing,” Blake Hancock, who plays school bully Scut Farkus, said. “Because it keeps the heart of the best holiday movie.”

For those unfamiliar with the story, Pletcher explained, “It’s set in the early 40s/late 50s. It’s based on Ralphie Parker and how all he wants for Christmas is a Red Ryder BB gun.

“Of course, everyone tells him, ‘You’ll shoot your eye out.’ But he doesn’t listen. His dad ends up getting him the gun and when he takes it out to try it, he almost shoots his eye out.”

“I think it shows sometimes that you should thank God for unanswered prayers,” Pletcher said with a laugh.

In terms of what might be different from the movie, Pletcher pointed to Ralphie, who is also the story’s narrator.

“In the movie, you hear the voice of the adult Ralphie; but, you never see him,” Pletcher said.

When asked about any themes central to the play, Pletcher responded with the importance of family.

“The dad is very gruff and he’s not mean; but he doesn’t appear to be that interested in his family.

“So, it means something when, in the end, he’s the one who comes through and buys the BB gun for Ralphie.”

Pletcher also noted the parallels to typical family life in the mother’s reaction to both Ralphie’s unexpected gift and his use of the father’s language.

“She was hysterical when he said a word that he heard his father say everyday,” Pletcher said. “When she asked him where he learned it, he lied and said it was from a friend at school.”

Pletcher said, “It’s very typical because if you own up that you heard (such) language from your parents, it’ll be very convenient to blame it on someone else.”

What makes the holiday movie special though seemed to vary among cast members.

“It’s a classic,” Salina Haycock, who plays Mrs. Parker, said. “Everyone watches it for Christmas. Some even watch it while decorating for Christmas.”

“I think it’s because he’s an average kid who wants that gun so much,” David Bowers, who plays Ralphie Parker, said. “How much he wants it, how much he earns it — it’s what makes it really special.”

Bowers, a Hamshire-Fannett student, will play the part of child Ralphie, and Cullen Kiker will the play the role of adult Ralphie.

“I like to entertain people. It’s fun getting into character and interacting with others, Bowers, 11, said.

“There was a good turnout,” Pletcher said of the auditions for the play. “It was really tough to decide who to choose.”

Pletcher said production was a little more challenging for this play because so many people have already seen the movie “A Christmas Story.”

“I think when it’s a classic like this, there’s a lot of pressure because you know it has to be right. Whereas if it were a lesser known show, there might be less pressure,” Pletcher said.

“They’re expecting to see the basics (of the movie) and the same quality of acting — I think we’re going to deliver it.”

Bill McCoy, president of the Greater Port Arthur Chamber of Commerce, welcomed new businesses to the chamber and thanked them... read more