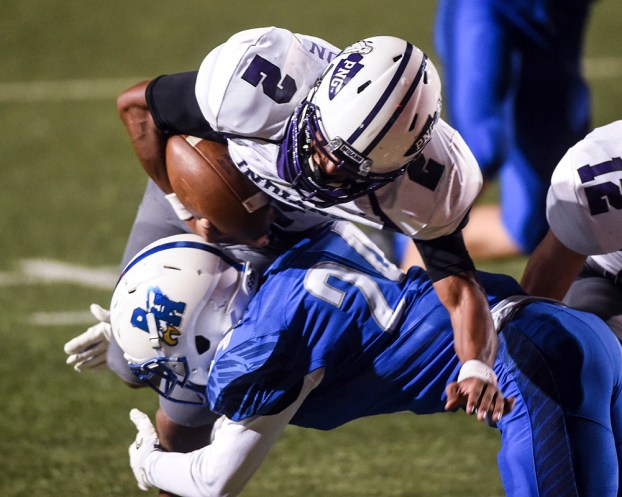 Roschon Johnson of PNG totaled 425 yards of offense last Friday against Barbers Hill in Beaumont. (Brian Vincent/Special to The News)

Home away from home: Indians make third visit to Baytown this year

• Willowridge coach Richard Lazarou, on the season that’s been: “We had a rough start but these coaches and players stuck to the plan. Last week vs. Waltrip we were down 0-21 at one point and no one lost their composure. The players and coaches just hung in there, remained steadfast, and we were able to pull off a big, big win.”

• PNG coach Brandon Faircloth, on Willowridge: “They’ve earned their right to be here. They’re a good team that has really good players. I know they’re hungry for another win, like we are. It’s going to be an incredible game.”

PORT NECHES — Stallworth Stadium in Baytown is getting to be a second home to Port Neches-Groves football.

“You know, it is,” coach Brandon Faircloth said Thursday. “We enjoy playing over there. They take care of us. They’re very hospitable. Our fans enjoy it. It’s an easy drive. It’s a stadium that can hold everybody.”

The Indians (10-1) will make their third visit of the season to the Goose Creek Consolidated ISD-operated stadium tonight. They blew out Goose Creek Memorial 42-7 on Sept. 1 and Baytown Lee 48-16 on Sept. 30 there.

And how fitting: PNG will be the “home” team for tonight’s 5A Division II area-round game against Fort Bend Willowridge (7-4). As if none of that is enough, the Indians don’t have to change their Friday night routine; they’ll kick off at 7 p.m.

“I think we’re all creatures of habit,” Faircloth said. “Whenever you can keep the same schedule for high school kids, I think it does help you to have the same schedule, play at the same time and play at stadiums you’re familiar with.”

It’s the second area-round appearance in a row for the Indians. Willowridge is continuing its first playoff appearance in seven years.

Eagles coach Richard Lazarou didn’t realize until after last Friday’s 28-24 win over Houston Waltrip how big that is, even considering they had to come from 21-0 down.

“There were a bunch of alumni there going all the way back to the 1982 state championship team,” he said. “They thanked the coaches and the players over and over again for blessing them with an opportunity to see another playoff win. God has humbled me big time through the way that community has come out in support of the coaches and players on this team.”

The tale of the tape shows some similarities between PNG and Willowridge. Each team has won four straight and features two outstanding run-pass threats.

Lazarou said the “closest thing” he’s seen to PNG sophomore Roschon Johnson, who has surpassed 3,000 total offensive yards in 11 games, is his own quarterback, senior Kealton Goffney. He averages 200 yards passing and 100 rushing, the coach said.

Lazarou called Goffney a blessing to the Eagles.

Goffney is a change in style from the last QB PNG had to try and contain, Barbers Hill slinger Cameron Cauthen. The junior nearly helped his Eagles complete a comeback from 12 points down in the third quarter.

“He’s a dual-threat quarterback, no question about that,” Faircloth said. “We’ve got to be careful and get a lot of guys around him. He can definitely tuck the ball down and make plays with his legs. He’s a good passer, too, and has a lot of passing yards.”

Three of PNG’s standouts are doubtful for tonight’s game, all due to injuries. Wide receiver and Texas A&M commit Keynel McZeal and running back Preston Hughes are likely to miss their second straight game, while defensive back Austin Bost was hurt in last Friday’s win over Barbers Hill.

So far, such adversity has not stopped the Indians. Lazarou is aware what PNG is capable of.

“We are thankful that God has blessed us with an opportunity to play a team as good as PNG this week,” he said.

Kadon Harrison remembers the last time the Port Arthur Memorial Titans were in the area round against the Fort Bend... read more