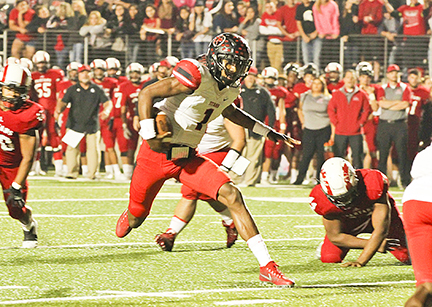 Port Arthur Memorial senior quarterback Kadon Harrison was a freshman on the Titans’ varsity team when Fort Bend Elkins, this week’s opponent, eliminated Memorial in the area round. (Morgan Jones/Special to The News)

Kadon Harrison remembers the last time the Port Arthur Memorial Titans were in the area round against the Fort Bend Elkins Knights.

His teammate, Jomard Valsin, also remembers even if he was not a part of the team.

The Knights in 2013 defeated the Titans, 48-21, behind the stellar play of then Elkins-receiver Jonathan Giles. Giles is now one of the top receivers in the NCAA at Texas Tech with 1,076 yards on 65 receptions and 12 touchdowns.

Harrison remembers the game and now wants revenge for some of those Titans’ teammates back in 2013 like Torian Lott, Albert Jacobs and Roderick Rucker.

“They had Giles back then who is now leading the Big 12 in receiving,” Harrison said. “We wouldn’t mind getting back at those guys. We know Torian and those guys would be happy we knock these guys out.”

The Knights come into Saturday’s 1 p.m. game at Turner Stadium in Humble fresh off a 28-20 win over Houston Madison.

Elkins is 6-5 overall and went 5-2 in District 23-5A. The Knights lost their first three games of the season and started the year off with a 51-14 defeat to Dickinson.

The Knights have won four straight games to get into the playoffs and have not lost since Oct. 14 when
Manvel defeated Elkins, 50-14.

Memorial played well in its first playoff game since the 2013 loss to Elkins. The Titans dismantled New Caney Porter last week, 49-3, and the team picked up 10 sacks against Spartans’ quarterback Jacob Hall.

Valsin was one of the leaders that night of the Titans’ defense that limited the Spartans to 202 yards, 65 rushing on 41 carries.

He had three sacks of his own and forced a fumble that was scooped up and returned 48 yards by Odis Mack for a touchdown.

The junior outside linebacker got a taste of what the playoffs are like and now isn’t ready to sit at home while other teams continue to play.

“It’s great getting ready for another week,” Valsin said. “We are back at practice and going hard. Our defense has become a group of relentless savages. We have KJ (Kary Vincent Jr.) at the corner, Keitha (Jones) at the safety, JB (Jaecorien Barnes) and O (Odis Mack) and linebacker and a good defensive line. We are stacked at every position.”

Valsin said last week was one of the most enjoyable weeks of the season because the Titans were able to go full out against Porter.

“We had a good time last week,” he said. “That is one of the best games I’ve ever had. I couldn’t have done it without the d-line. They took up all the blocks so I give a shout out to them. This week we have to do the same thing. Pin our ears back and go get it.”

Harrison knows that is the only way to keep winning football games, going full out. He has noticed a difference even in his father and coach, Kenny Harrison. Coach Harrison has been extra vocal at Titans’ practices the last two weeks coming off the Memorial’s lone loss of the season, a 31-21 defeat to Vidor.

“Preparing for another week is a blessing because not everyone gets to play this late in November,” the senior quarterback said. “My dad is telling everyone that if you don’t take practice serious then you are going to be at home. The team has really responded to that. The practices have been real intense and feeding off his energy.”
•
Gabriel Pruett: 721-2436. Twitter: @PaNewsGabe

BEAUMONT — Port Neches-Groves senior Cheyanne Orozco has been named the District 22-5A most valuable player. The all-district selections and... read more