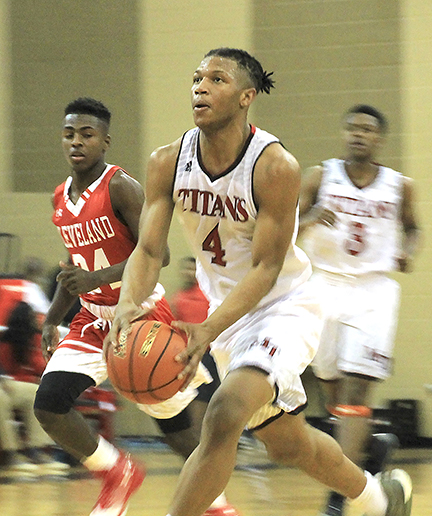 Darion Chatman of Memorial drives for a layup as Rashad Carter of Cleveland tries to defend Tuesday. (I.C. Murrell/The News)

Titans get offensive against Indians

Port Arthur Memorial won’t play another home boys basketball game for 32 days, so the Titans made the most of Tuesday’s home opener.
Three Titans scored in double figures Tuesday, helping Memorial take an 82-43 win over Cleveland and improve to 2-0 on the season.
“It was a good way to start,” said junior Darion Chatman, who had 18 points. “We just hope to keep going, keep the same game plan up and everybody healthy.”
Coming off an 80-77 win at Channelview on Saturday, Memorial lived up to coach Kenneth Coleman’s calling card of defense.
“That’s all he tells us,” Chatman said. “Our defense is our offense. We don’t worry about offense that much.”
But there was plenty of offense for the Titans to go around.
Junior Thailan Wesley led the way with 21 points and senior Bishop James had 15. Memorial nailed seven three-point baskets and cashed in on transition points off of forcing turnovers while also controlling the glass with much more size than the Indians (1-1).
Cleveland led just once, 2-1, and found itself down by 10 two minutes later.
“I just wanted our kids to play hard,” Indians coach Matt Brackett said. “It’s our second game of the year. We haven’t been in the gym very long. We have a lot of kids just getting out of football, and we’re real young. I just want to see these guys compete and play hard.”
Chance Brown scored 17 points to lead Cleveland, which has only two seniors on the roster.
Cleveland beat Hamshire-Fannett in its opener. Tuesday night, Memorial hardly gave the Indians a chance.
Memorial led 22-9 after one period, 52-18 at halftime and 71-32 through three. Chatman, a forward who hit two treys, showed his improvement in his outside game from last season, citing his training with Lincoln graduate and former Texas and NBA player B.J. Tyler over the summer.
Chatman isn’t the only Titan who’s improved from last season.
“Every one of them,” Coleman said. “We had an extremely good offseason, extremely good summertime, extremely good preseason, so everyone has gotten stronger, quicker, faster, and plus just more mature.”
The next time Memorial plays at home, Fallbrook College Prep of Houston will come to visit Dec. 17. The Titans will be off until visiting Houston North Forest next Tuesday and then play in Beaumont’s Fred Williams Classic and tournaments at Clear Creek and Cy-Fair before that date.
So, Memorial’s gym was a welcome sight for Coleman and his team.
“It felt good to come back home, for one,” he said. “They’re doing a very good job. They go very hard, anyway. In a game like this, you just want to execute. You’re always trying to prepare for the next game, down the line and stuff. So, you don’t want to waste an opportunity to get better.”
•
I.C. Murrell: 721-2435. Twitter: @ICMurrellPANews

Bears take down Indians in opener