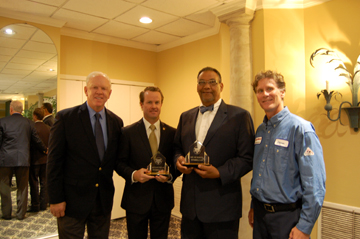 State Reps. Joe Deshotel and Dade Phelan spoke at the Golden Triangle Business Roundtable meeting on Tuesday afternoon in Port Neches and gave a preview of what the Texas Legislature will be tackling in 2017. They are, from left, Dennis Isaacs, executive director of the GTBR; Phelan; Deshotel; and Darren Goertz, chariman of the GTBR board and engineering manager for Exxon-Mobil in Beaumont.

PORT NECHES — State Rep. Joe Deshotel hit the nail on the head when he said it’s a new day politically in the United States when he spoke at the Golden Triangle Business Roundtable on Tuesday afternoon at the Pompano Club.

Deshotel and fellow State Rep. Dade Phelan were the guest speakers at the meeting and they gave a preview of the upcoming Legislative session in the spring of 2017 in Austin.

“I was glad to see the Obama Administration give President-elect Trump an opportunity to transition. “It’s not in the best interests for either side to cause confusion,” Deshotel said.

“I’m proud of the way Hillary Clinton handled losing the next morning. She lost to Obama in 2008 and now Trump. It must not be easy for her. I think this is the first time since 1928 the same party has had the presidency and both houses.”

Though Deshotel is a Democrat, and Phelan is a Republican, Deshotel said he and Phelan work well together. Most of the bickering in the Legislature isn’t over partisan issues, but most bickering is between large cities and rural areas.

One particular area Deshotel would like to focus on is early childhood education and reforming the State of Texas Assessments of Academic Readiness, or STAAR testing.

Instead of using the STAAR as an assessment tool, it could be used to measure where the student is. The test has been narrowed down to five tests from a high of 15 tests.

The STAAR was never intended to be a measure for college readiness as the SAT or the ACT.

“Teachers can get back to teaching,” he said. “My highest priority is education. We need an educated workforce for economic development and a high quality of life.”

Deshotel said experts in cognitive development can tell if a 3 year old will either go to prison or go to college when they grow up. Consequently, he favors legislation to give stipends to day care centers that deal more with training of young minds.

“We need to put money on the front end,” he said. “It’s a hard sale though because people want to see immediate results.”

Another area of legislation is those who have prior misdemeanor convictions are barred from applying for employment and changing that.

“We spent so much time last session on open carry that we didn’t have enough time for other bills and the session ran out,” Deshotel said. “This time it will be about bathrooms (transgender issues). “

“The senate is really far right. The House is more moderate. The state constitution only requires us to pass a balanced budget.”

Speaking of the budget, revenues are down significantly because of lower oil and gas prices.

“Some difficult decisions need to be made,” he said.

“He’s a wild card. Nobody’s sure what he will do,” he said. “We now may get a waiver for the STAAR tests under President Bush’s No Child Left Behind.”

Texas may also have much more clout this election term with seven committee chairmen in the U.S. House of Representatives from the Lone Star State and some Texans rumored to serve in the Cabinet.

Texas is a growing state with an estimated 1,000 new residents moving in everyday and services will have to be provided for them.

“We now have much more of a diverse economy because we’re feeling the pinch of oil and gas prices,” he said. “There’s $10.4 billion in The Rainy Day Fund that we could use one time for infrastructure needs.”

Another area needed to be looked at are mental health issues in the state. Phelan said it is so much cheaper to treat on the front end than addressing it from the back end.

Diagnosis for mental illnesses are being caught much later in life and patients need to be in a mental health facility or on their medications.

Texas, additionally, is facing several lawsuits, one of which is against the foster care system.

There has been a large turnover of caseworkers.

For instance, he believes public education funding needs to go to the local allotment rather than having Austin decide.

State pensions are facing $60 billion in unfunded liabilities. For example, Houston firefighter and police associations overfunded their pensions by $3 million and they’re asking the Legislature to write a check to cover expenses.

Phelan hopes the Trump Administration will repeal the Affordable Care Act and replace it while keeping some portions of it in tact.

Another plus, he hopes, is the federal government will secure the border rather than Texas having to do it and costing the state from $800 million to $1.1 billion a year.

Large metropolitan areas such as San Antonio and Dallas continue to look at East Texas’ water supplies for their own uses. However, a funding bill authored by then-State Rep. Allan Ritter of Nederland found funding for projects for entities that don’t have resources and to leave East Texas water alone.

This session, Phelan will introduce that property tax appraisal districts be elected rather than appointed.

“No taxation without representation,” he said. “They can be voted for and held accountable.”

The audience then asked the legislators some questions.

One pertained windstorm coverage. Phelan said in the Legislature, it’s the 14 coastal counties versus the more than 230 other counties.

He said it’s always a battle, but the coastal counties also spend much on forest fires and hail damages in other parts of the state and they expect the same coverage for the coast.

“We don’t anticipate a lot of success on this,” he said.

There is also outside competition available for windstorm coverage and customers can expect to see their rates go down after a certain amount of time.

Another concern to be addressed is coastal erosion.

Deshotel called it a “coastal spine” to protect the coastal counties.

The coastal spine will cost from $11 billion to $15 billion. Congress must appropriate the necessary funds.

“There may have to be another devastating hurricane before we can get the funding,” he said.

From PN skating rink to church