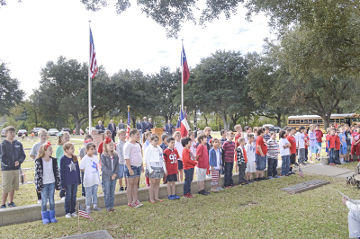 PORT NECHES — Community members, leaders, teachers, students and more came together Friday to honor and show their support for their veterans.

“It joins everyone together and shows that we believe in those who defend our country,” Craig Melancon of Melancon’s Funeral Home said.

“It shows how much we appreciate them.”

In Melancon’s opinion, the annual celebration is growing.

“We’re getting a little bigger each year. The kids are really responding to us. People are bonding together.”

Senior Vice Commander of VFW 4820 Ken Davis welcomed those in attendance and led the Pledge of Allegiance. After the event, he was available for comment.

Davis recalled how much public opinion has changed since he was in the service.

“Back when I came home, I had this guy come up to me and spit in my face.”

Davis said he felt a lot of the younger generation, in particular Millennials, did not respect or remember their servicemen as much as the older generations did.

“In my time, what Millenials are now, we had hippies — the generation that protested us. The older generation at the time didn’t want to get involved.”

Davis remarked on the volatile situation back then.

“When you came back, you either had to hide your head or you had to fight everyone everyday,” Davis said.

“It’s a whole different world when you see combat. You see things you shouldn’t and you do things you wouldn’t.”

Davis commented on the hardships that many veterans have to deal with.

“There’s this old saying for Vietnam Vets: ‘When were you in Vietnam?’ ‘Last night,’” Davis said, referring to the regular flashbacks that he and many other veterans have.

“I’m still in counseling. This time of year for me is bad.

Davis said, “Not everyone comes back with wounds to show.”

In the Sr. Vice Commander’s opinion, while the American people might have started showing greater care for veterans, the U.S. government was another matter entirely.

“Back then the VA did nothing for us,” Davis said, before adding that many veterans turned to alcohol as a response.

“It took them 45 years to get my claim put through the VA,” Davis said. “They don’t care.”

Davis explained his view on the government’s stance on veterans.

“You send your troops over there; we did what we were supposed to do. But, as soon as we did our job, they didn’t care about us anymore. They don’t honor their obligations.”

In Davis’ opinion, veterans who have fought recently in the Middle East — in conflicts like Iraq and Afghanistan — face many of the same hardships that Korean and Vietnam veterans faced with one key difference.

“That’s why it was different for Vietnam vets.”

According to Davis, however, the public mood is changing.

“It’s starting to rub off,” Davis said about Veterans Day and events like the one at Oak Bluff. “This is getting bigger every year.”

Davis said he felt good about the next generation of children from Woodcrest Elementary who sang at the opening of the ceremony.

“I see hope in this generation,” Davis said, indicating the school children across the lawn. “They’re a new generation with good teachers. The teachers are doing a good job.”

Davis also expressed thoughts on some of his life.

“My life hasn’t been perfect. I’ve gone through four wives and don’t have a good relationship with my children,” Davis said.

“When people first started this with coming up to us and thanking us for our service, we were a little hesitant at first. We didn’t know how to take it.

“But now, we see that they mean it. It means something now.”