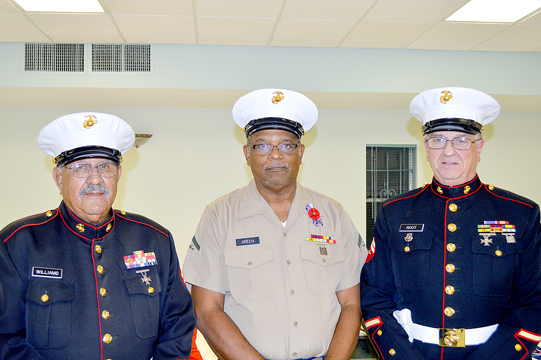 C.P. Williams (from left), David Green and Mike Root stand together at the Veterans Dinner at Our Lady of Guadalupe Church Parish Hall. (Lorenzo Salinas/The News)

Veterans were the focus of a Veterans Dinner hosted by the Knights of Columbus 12809 on Thursday evening at Our Lady of Guadalupe Church in Port Arthur.

The dinner honored those who served and commemorated Veterans Day for those in attendance. The holiday also seemed to remind its guests of its importance in the lives of veterans.

“Everything has changed in regards for our brothers in service — a lot more respect. A lot more people come up to us and thank us for our service.”

Root attributed much of that newfound recognition to the Vietnam Veterans Memorial Wall and its job of raising awareness for veterans.

“It boosts our moral,” Root said.

That same appreciation for the local veterans group seemed to extend to other veterans as well.

“I found a lot of satisfaction in doing funerals. … It’s so rewarding to help them out,” Lonnie Guidry, former Marine platoon sergeant and veteran from Vietnam in 1968, said.

Guidry was also thankful of the support that came from others.

“The public’s support has been good. The VA’s (support) has been slow with a lot of problems, but the new president has said he’d support the veterans,” Guidry said.

“It has changed a whole lot,” Green said, referring to the hardships soldiers coming back from Vietnam faced. “They really do treat us a lot better.”

Green mentioned other hardships he had experienced while over there.

“It was traumatizing. I saw body bags of people we were friends with not two days ago being loaded into helicopters. It was tremendously hard for me.”

The appreciation that comes with Veterans Day appeared to help somewhat at least.

“Now people appreciate us a lot more,” Green said. “The new (focus) has been great. It makes you feel good when people thank you for your service.”

“They didn’t really like Vietnam,” Frank Jackson said of the public’s opinion during the war. Jackson served as a military clerk from 1964 to ’65 in Vietnam.

“The government had our hands tied. They extended it in my opinion.”

Jackson’s experience in the armed services lasted eight years — four years in the Army and then four years in the Reserves. He was part of the Military Police before making a move to a civilian police department.

“It wasn’t very good. They didn’t get welcomed back,” Jackson said. “It’s changed a lot today.”

The particular sense of renewed appreciation for their service to their country appeared to be one that many veterans at the dinner felt.

“A lot of people in the last two to three years come to shake my hand and to thank me,” John Jackson, Army veteran of the Korean War from 1950 to ’52, said.

When asked why he thought this was, Jackson responded,

“I don’t know, but I notice they come up and shake my hand more often.”

Jackson also expressed optimism about some of the services that the government offers.

“The VA has gotten better in the last couple of years,” Jackson said. “I used to have to go to Houston to get new hearing aids, but now they have them in Port Arthur.”

On a recent afternoon, members of the Memorial High School Marching Heat Band assembled in the band hall and gave... read more