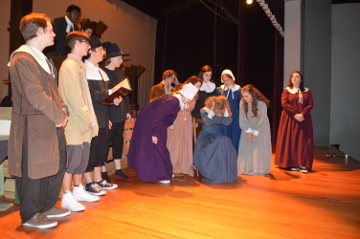 PORT NECHES — Arthur Miller’s tale of accusations, fear and betrayal in the Puritan New England town of Salem are coming to life in Port Neches-Groves High School Theater Department’s production of “The Crucible.”

Eric Rozell, a senior who portrays John Procter, said the play is really about the fears of McCarthyism and what fear drives people to do.

“The message is that when in fear, don’t freak out. Do what you need to do,” Rozell said. “Keep this in mind and don’t jump to conclusions.”

William Ntsoane brings to life the character of Judge Hawthorn.

“He’s more of the silent type, more of a thinker,” Ntsoane said.

“I feel as though Elizabeth is obviously hurt. John abused her trust throughout the play and she’s cold to him,” Webb said. “But by the end she lies in court and says John didn’t do what he did do. Her coldness warms again and she understands what she did was for love.”

Sineka Guss takes on the role of Abigail Williams.

“She ruins everyone’s lives. She accuses people and has no remorse. She literally ruins the entire area then steals her uncle’s money and leaves town to save herself,” Guss said. “She’s ruthless.”

Melissa Eyles, theater director, said the play shows that people are capable of great evil and great good and no one is all evil or all good.

Tickets are $7 for adults and $5 for students. They can be bought at the door and online at http://pnghs.seatyourself.biz

NEDERLAND — A historical marker along Boston Avenue in front of a replica of a windmill pays homage to the... read more