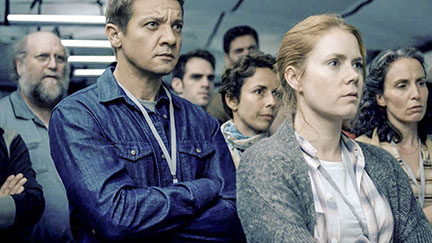 THE MOVIE GUY: ‘Arrival’ of one of year’s best films

3 and a half stars

As much as I enjoy science fiction films, my preference goes to those harder stories that grapple with genuine social and technological issues, rather than the movies that are simple action adventures set in outer space. That should explain why I’m absolutely buzzing about “Arrival,” a first-contact film by director Denis Villeneuve that is certainly one of the best films of 2016.

The movie opens with 12 mysterious spaceships suddenly appearing at seemingly random spots around the world. Amy Adams stars as Dr. Louise Banks, the world-renowned professor of linguistics, who is called in to come up with a way to communicate with the extraterrestrials. Jeremy Renner co-stars as physicist Ian Donnelly, who believes that we should be using the universal language of mathematics in our attempts at communication.

That difference of opinion pales before the larger issue of how world governments, and military forces will deal with the aliens. Dr. Banks is in a race to figure out what the creatures intend, and in the expert hands of Villeneuve, this cerebral story is every bit as thrilling as any action spectacle.

The director has expertly crafted this tale, laying out the technical details of first contact with just enough detail to get the audience invested in the mechanics of the process. Adams fills in the emotional part of the story, playing the woman who doggedly sets about unraveling the mystery of Alien language, but who is also haunted by some rather devastating emotional trauma.

All of that makes “The Arrival” into a science fiction epic that will satisfy both the mind and the heart.

It should also satisfy audiences that just want to see some cool movie monsters. The extraterrestrial creatures are squid-like heptapods that communicate with elegant smoke rings and low throbbing squeals. They are frequently shrouded in smoke, which allows the audience to fill in the details, and has the added benefit of keeping the film’s budget down.

So the odds are that “The Arrival” will end up making money at the box office. I also think that there are pretty good odds that the film will garner a few Academy Award nominations. I think this bodes well for the director’s next project, the sequel to “Blade Runner.”

More important, I dearly hope that this critically acclaimed and probably profitable movie will encourage filmmakers to produce more thought-provoking science fiction. I would love to see more films like “Arrival” arriving in theaters on a regular basis.

Movie reviews by Sean, “The Movie Guy,” are published weekly in “The Port Arthur News” and seen weekly on KFDM and KBTV. Sean welcomes your comments via email at smcbride@sbgtv.com.com

That unique blend of barbequed meats, powdered sugar and deep fry batter is virtually a hallmark of any carnival that... read more