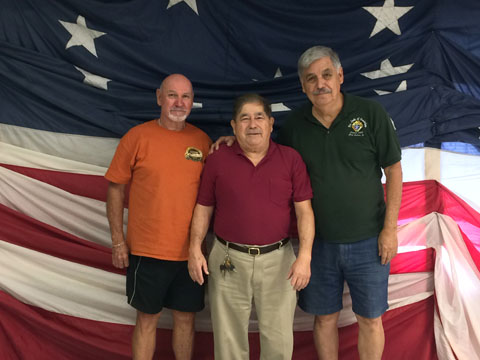 Knights of Columbus members (from left): Frank Jackson, Jesse Garcia, Jr., and John Solis stand in front of the flag they set up for KoC’s Veterans Celebration. (Lorenzo Salinas/The News)

Veterans Day draws near, and local organizations like the Knights of Columbus intend to honor that date by honoring those who have served their country.

Our Lady Guadalupe Knights of Columbus Council 12809 is hosting its 7th Annual Veterans’ Celebration at 6 p.m. on Nov. 10 at the parish hall in Our Lady of Guadalupe Catholic Church in Port Arthur.

A dinner buffet would be served to all guests, as well as speakers and a brief introductory program for all attendees.

“We provide free food, camaraderie and people who give (veterans) recognition,” John Solis, KoC member, said. “We have a good time here.”

This iteration of the Knights is a relatively new group, according to Solis.

“We’re a fairly new organization. We’re a fraternal Catholic organization,” Solis said. “We are here to aid anyone who needs our help. We’re here to meet Christian needs.”

For Solis and fellow KoC members, that also means paying all due respect to U.S. veterans.

“We want to honor everyone who was in the military service,” Solis said.

Solis highlighted the importance of brotherhood and all those who were comrades-in-arms.

“This is a brotherhood, everyone who were veterans,” Solis said. “The Knights of Columbus can show what we think of them.

“I’m a veteran. I appreciate this.”

Solis was also quick to point out the importance of days of national observance.

“Everyone deserves one day of recognition,” he said. “One day out of the year where people can say things like, ‘Thanks for your service.’”

Solis mentioned that two World War II veterans were invited to the dinner. They both would be around 95 years old.

“The Southeast Texas Veterans Association comes all the time,” Solis said. “They provide services: if you’re a veteran and you die, they provide you with a full military burial.”

Solis described the response from the veterans who have attended their annual dinners before, as well as the community surrounding them, as “tremendous.”

Still, Solis believed that there was a lot of indifference to veterans in the country.

“I think there’s a lot of apathy toward veterans,” Solis said. “Especially when they come back with post-traumatic stress disorder… People don’t care.”

Solis made special mention of veterans from older wars such as Korea and Vietnam attending their dinners more often than veterans of more recent wars like the Gulf War and Afghanistan.

When asked why he thought this was, Solis responded, “Because us older guys know the end is near.”

Jesse Garcia, Jr., a fellow KoC member, said that the Veterans Celebration is a good way to meet with other veterans.

“It gives them the chance to visit with each other,” Garcia said.

“We really enjoy watching them enjoy themselves. Some can’t wait to come back next year.”

Basketball season is in, and it’s coming to the YMCA this weekend; however, it won’t be between the usual teams.... read more