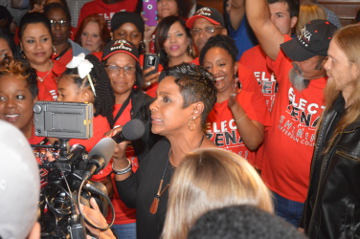 BEAUMONT — History was made Tuesday night with the election of Zena Stephens as sheriff of Jefferson County.

But in her celebratory speech, the first female and first African American person to be elected to the position in the state of Texas did not mention these facts as she spoke to a crowded room of supporters at Suga’s Deep South Cuisine and Jazz Bar in Beaumont.

Instead, she gracefully thanked her supporters and reminded them that the work doesn’t end today but actually starts when she accepts the position and is sworn in as sheriff.

Stephens, who ran on the Democratic ticket, and Republican opponent Ray Beck, were neck and neck throughout the night as ballots were tallied. Stephens came in with 44,566 votes or 51.40 percent of the total ballots cast and Beck brought in 42,135 votes or 48.60 percent of the ballots cast.

Cade Bernsen, the Jefferson County Democratic Chair, held a broom up, bristles up, as the crowd chanted for Zena.

“We made history. There’s a new sheriff in town,” Bernsen said. “Tomorrow, the sky is the limit but today we have made history in the state of Texas.”

Darrell Stephens walked into the circle of supporters toward his wife, the sheriff-elect, with a bouquet of roses as the crowd began to chant “Darrell.” He also offered thanks to the people who supported “Zena for sheriff.”

As the scene unfolded Sosthene and DeLisa Fuselier threw their fists in the air, cheered and applauded Zena Stephens.

“This is a history making event,” DeLisa Fuselier, a former classmate of Stephens, said. “She deserve it and she’s qualified.”

Early voting totals shows both candidates for the position of sheriff of Jefferson County are neck and neck. Ray Beck,... read more