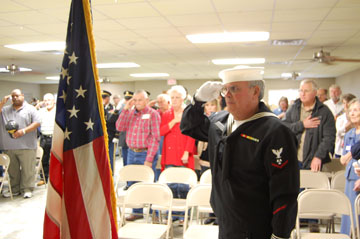 Vietnam veterans were honored for the 50th anniversary of the Vietnam War on Tuesday afternoon at the Port Neches Kights of Columbus Hall.

PORT NECHES — Julia Yeaman, Regent for the Captain William Sanders Chapter of the Daughter of the American Revolution in Port Arthur, said she was almost moved to tears after the 50th Anniversary of the Vietnam War that was held Tuesday afternoon at the Port Neches Knights of Columbus Hall.

The DAR Port Arthur Chapter, along with the William Diamond Chapter in Orange and the Southeast Texas Veterans Service Group hosted the event.

Glenn Johnson, mayor of Port Neches, was the first speaker. He said since the American Revolutionary War, the United States has been involved in 103-armed conflicts. Currently the U.S. is involved in three conflicts around the globe.

Veterans Day, which will be observed on Nov. 11, was formerly known as Armistice Day to honor veterans who served in World War I.

The city also observes Memorial Day in May at Oak Bluff Cemetery and they host a veteran’s parade for Riverfest.

Johnson’s grandfather served in World War I, his father in World War II, his uncle in the Korean Conflict and he himself during the Vietnam War.

He said that not only veterans are involved in conflicts, their families back home are too.

Johnson then read from a proclamation declaring Nov. 8 as Vietnam Veterans Recognition Day in the city.

Some of the highlights of the proclamation are the Vietnam War ended what was then the longest war in the nation’s history.

“It is important to honor the men and women who survived and the 58,260 men and women who gave their lives,” it read. “Since their return, these veterans have contributed tremendously to their communities, their states and the nation.”

“Throughout this commemoration, let us strive to live up to their example by showing our Vietnam veterans, their families and all of the men and women who have served our country, the fullest respect and support of our grateful city, state, and nation.”

Dr. Jane Garrison, District 5 director for the Texas DAR, said she has had relatives who served in the military and she has also worked at the Michael E. DeBakey Veterans Affairs Medical Center in Houston.

She is also national chair for Project Patriot for the DAR — a program designed so never again would a veteran not be supported as Vietnam veterans were.

He said President Woodrow Wilson proclaimed Nov. 11 as Armistice Day. Veterans Day is about heroes, but the word hero is one of the most misused words today.

By definition, hero is about distinguished courage and heroic deeds. People who run toward danger rather than away. Young people who travel far away to serve their country.

“It’s never too late to say thank you,” Phelan said. “That war was so complex and I’m not going to go into all of the politics.”

“I went to China this summer and it’s unbelievable the barbaric way communism treats its people. They have no internet access, everything is monitored, the leaders pick who will serve in office. They say democracy is a tragedy. There are only 11 websites sanctioned by the government. It was good we did everything we could to stop communism from being spread.”

Phelan, however, believes the Chinese economy is frayed because Americans are buying less of their merchandise.

The Vietnam Wall Memorial, in Washington, D.C., according to Phelan, is one of the most unique monuments because it is a living shrine, honoring life-by-life, person-by-person.

“We need to do more than just annual ceremonies. It’s about how do we treat the living soldiers?” he asked. “The State of Texas has treated veterans so good. Many move back here or come from other states. There are 937,000 veterans in Texas. The unemployment rate for veterans nationally is 12,000. In Texas it’s less than four percent.”

He then spoke on some legislative issues pertaining to veterans. He said a man moved to Texas from California and decided he wanted tuition assistance to attend the University of Houston under the Hazelwood Act. His father was a veteran from Oregon and not Texas.

A lower court ruled he could get the tuition assistance, but an appeals court threw it out.

Phelan said Hazelwood is now back on sound footing.

Another issue are state employees who are deployed will now see no delay in getting state benefits.

Phelan said he would like to see the Legislature address metal health issues.

“Twenty vets a day take their lives by suicide. The federal government is doing nothing. The State of Texas can do something about this,” he said.

Both Christus St. Mary’s and Baptist Orange Hospital have stopped long-term patient stays and Phelan thinks one of the hospitals would make and excellent VA facility so veterans wouldn’t have to travel to Houston for care.

He concluded his speech by saying:

“Democracy is the best system in the world. We wouldn’t have democracy if it wasn’t for veterans.”

NEDERLAND — A woman practicing driving crashed into the side of Bobby’s Homestyle Cooking in Nederland on Tuesday afternoon. Nederland... read more