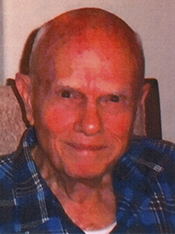 He was born in Lawrenceburg, Tennessee to Herschel V. Brewer and Alice Simms Brewer August 18, 1920.

He is survived by his wife of 73 years, Jennie Bell Brewer whom he described as the most caring and loving wife any man could ever have.

After graduation from Port Arthur Radio College, his first job was as engineer/operator at WCOV, Montgomery, Alabama. He then enlisted in the Merchant Marines and served four and a half years as radio operator aboard tankers and sea-going tugs of the Sabine Transportation Company, whose ships operated in the Gulf of Mexico and Atlantic Ocean during all of World War II.

He later retired as a senior clerk with 35 years of service at the Texaco refinery in Port Arthur.

“Jim” received his FCC amateur radio operator license at age 16 and enjoyed that fine hobby all of his life, making many friends, both local and far away. He designed and built many electronic devices including a hearing aid which he needed after a prominent Port Arthur ear specialist removed his hearing along with the wax from his ears.

He was a member of First United Methodist Church of Groves where he had many friends. He once joked when asked who he would like to serve as pallbearers, that since most of his friends had preceded him in death, they might have to hire EMS (emergency service) people to do the job.

Funeral services will be held at 2:00 p.m., Wednesday, November 9, 2016 at Levingston Funeral Home in Groves with Reverend Marty Boddie officiating. Burial will follow in Memory Gardens Cemetery in Nederland.

A visitation for family and friends will Tuesday evening from 5:00 to 8:00 p.m. at the funeral home.

The family would like to thank the loving caregivers who helped take such good care of him the past five months-Autumn, Elvira, Holly and Leslie.