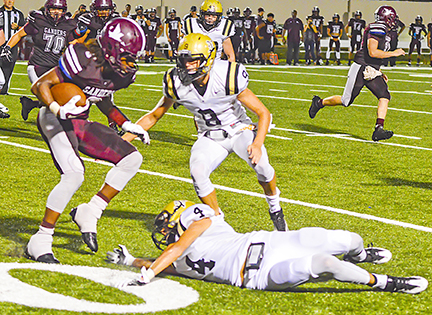 He would especially hate to do that before Friday’s game at The Reservation against the Port Neches-Groves Indians.

There is a family statistic the elder Sheppard wants to make sure remains in place after Friday’s 93rd meeting of Nederland and PNG.

“There is extra pressure since it’s his senior year,” Lance Sheppard said. “The Bulldogs have never lost with this Sheppard family on the field.”

Lance Sheppard played in 1987 and 1988 and he has two brothers that also went to Nederland and played football. His brother Cody Sheppard coaches at C.O. Wilson in Nederland.

Now Ty Sheppard is looking to keep the family perfect in Mid County Madness games. Sheppard is 1-0 so far after playing in last year’s 30-27 Bulldogs’ victory.

“It being my senior year, it is a bigger deal and it means a lot more to me,” Sheppard said. “I know there is no other shot after Friday. I expect us to play hard and get the win.”

Sheppard and the Bulldogs have done a great job over the last month to climb back into the playoff race. Nederland has done it by treating each week as a playoff game and now this week the team knows it is not just another week.

“You can’t put this week into words to describe it,” Sheppard said. “It is way different. It is not only two teams. It is two communities clashing. Everyone wants their side to win. From the time you are young you are raised that this game is different. This game means more. Just to be able to play in it means so much to me.”

There are a lot of coaches at Nederland who are very glad Sheppard is a part of this game.

Coach Larry Neumann said Sheppard has missed some time this year because of minor injuries and he could tell when he was not on the field.

“Ty is totally invested in our program and in being a Bulldog,” Neumann said. “The thing he has done is his quiet leadership style. He steadies everybody on the back end of our defense. He makes the calls and he has grown into. When he is not back there with the rest of them, we are different. We settle done a little bit with Ty back there.”

“He has become the anchor of our secondary,” Theriot explained. “We have a number of younger guys and he has become that coach on the field that we needed. Every thing we do is about communication and he has done a great job with that.

“You can tell the difference when he is not on the field. He is such a great leader. It is crucial he is out there.”

Sheppard has also had a line of communication with many people at PNG High School. He is buddies with Indians senior defensive back Jacob Vaughan and Brandon Morse, a varsity baseball player at PNG.

“I got some friends over there and we always talk to each other before the season,” Sheppard said. “I wouldn’t say we aren’t friends but this week is different. We won’t talk as much.

It is more business this week.”

If Sheppard and the Bulldogs handle their business Friday, the family tradition of being Nederland’s biggest rival will continue.

“It has been six years since PNG won and hopefully it will be seven,” Sheppard said. “You don’t want to be the team that ends the streak. We all feel that pressure. You can’t let it overwhelm you and have to continue to play within yourself.”
•
Gabriel Pruett: 721-2436. Twitter: @PaNewsGabe

PNG pride passed on to LeJeune

PORT NECHES — Logan LeJeune was watching Port Neches-Groves football long before he can ever remember. The senior linebacker was... read more