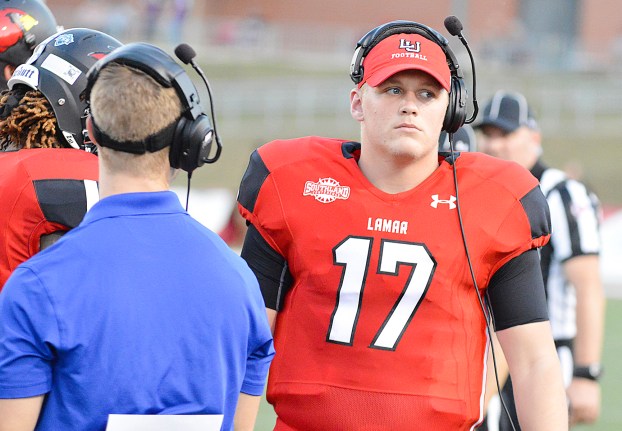 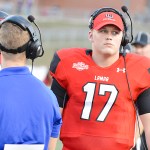 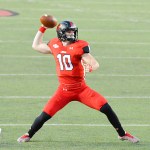 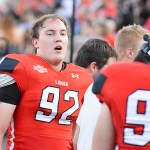 Lamar senior defensive end and Nederland graduate Koby Couron talks to teammates after picking up a sack in the first half Saturday against Houston Baptist. (Gabriel Pruett/The News)

BEAUMONT — At Lamar, the future is now.

While it looks good, the present is anything but.

Junior quarterback Andrew Allen went down with a season-ending collarbone break and true freshman walk-on Case Robinson was “beaten up” in his season debut Saturday night, prompting the Cardinals to lift the redshirt from 2015 Port Neches-Groves graduate Adam Morse in the fourth quarter. Morse engineered a touchdown drive on his first series but came up short in the red zone on his second possession, and Houston Baptist earned a signature win in its young football history with a 24-17 victory before a homecoming crowd of 7,777 inside Provost Umphrey Stadium.

It’s the second straight homecoming loss for the Cardinals, who were stunned by a one-win Nicholls State team last year. Lamar (3-5, 3-3 Southland) visits Nicholls on Thursday and must win its remaining three games to salvage only the second winning record in coach Ray Woodard’s seven seasons.

Morse completed 7 of 14 passes for 54 yards and an 8-yard touchdown pass to DeWan Thompson with 7:57 left. Houston Baptist (3-5, 2-4), playing only its third full season of football, earned a pair of first downs on its next drive and milked more than 4 minutes off the clock before punting to the Cardinals with 3:31 left.

Thompson, who had seven catches for 67 yards, caught three passes from Morse on their final drive and gained a first down. Morse went incomplete on his next five attempts, but the Huskies drew two pass interference flags to extend the drive.

HBU declined an illegal touching call against Lamar when Port Arthur Memorial alumnus Trenton Swinton came back inbounds to catch a pass, and another attempt sailed through Thompson’s hands. Thompson pulled down a 3-yard catch to set up fourth-and-7 from the Huskies 16, but he was well covered down the middle by Chris Hardeman, who batted down the pass with 1:45 left.

Two weeks earlier, Lamar recovered an onside kick after a touchdown against Northwestern State and capitalized with senior Carson Earp’s 22-yard scoring pass to Thompson with 6 seconds left on fourth-and-20.

Since then, Earp sustained a season-ending shoulder injury at Central Arkansas, and Allen went down on the game’s first drive as he was sacked and fumbled the ball deep in his own territory.

Robinson, of Crockett, completed his first three passes, one of which went to Zae Giles from 6 yards out to even the score at 7-7. Robinson went 7 for 12 for 66 yards, but hardly chucked the long ball in his debut.

Lamar’s Omar Tebo blocked a 34-yard field goal attempt from Alec Chadwick early in the second quarter. The Cardinals went ahead on a 26-yard Juan Carranco field goal try with 2:03 left before the half.

Robinson was slow to get up after a fourth-and-5 pass to DeAndre Jennings went for minus-13 yards. Woodard said he pulled out Robinson because he was “beaten up” and the staff needed to see Morse play.

Robinson walked off the field under his own power and is expected to be available for the Nicholls State game.

Dawson fumbled on the very next play, giving the Cardinals life with Morse taking over.

Unbeaten at home: Titans take care of business, earn share of District 22-5A