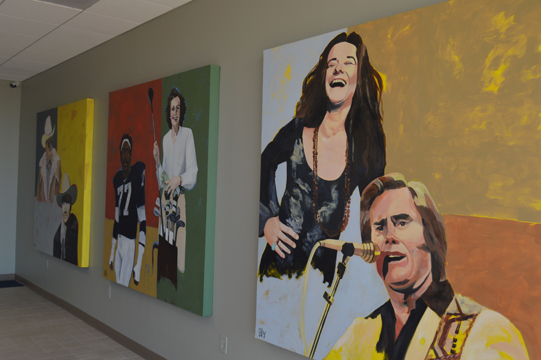 Natives of area portrayed and displayed proudly at airport

Airline passengers will now get the chance to see some of the local legends that made Southeast Texas famous whenever they arrive or depart — courtesy of a local artist and the funding that enabled her work in the first place.

Beaumont-based artist Summer Lydick had been commissioned by the Jefferson County Tourism Commission to create the works of art. The paintings were unveiled Thursday morning.

“We really wanted to do something nice for the legends that put us on the map,” Dean Conwell, executive director for the Beaumont Convention & Visitors Bureau, said.

“This is a work in progress. We’d love to have it grow.”

Conwell added, “We thought that we wanted to dress up the airport and thought that portraits of local legends would be a great representation.”

Conwell said that there could be plans for possible expansion in the future involving paintings of other celebrities sitting atop wooden racks that would also sell visitor guides.

“It shows the outstanding individuals who came from here,” Alfred said.

“I think when some people come off the airplane, they can see Bum and know that Bum came from this area.”

The fame that Alfred alluded to would also be something that Lydick took into great consideration for the project.

“Everyone knows what they look like here, so I had to take painstaking efforts to get them right,” Lydick said of her famous subjects.

Lydick likened the creation process to a cover song — its original fans will know if you play the song correctly or not.

The local artist also said that while there was pressure enough to complete the project and to do a good job with it, she was wise enough to “not to be so perfect to not get it finished.”

Lydick pointed to Joplin’s hand in the portrait and described it as “a hand with no bones in it.”

“Most people wouldn’t notice that. Other artists might because they would know what to look for,” Lydick said.

Still, the reaction from the people in attendance was positive, and Lydick was regularly praised for her work at the event.

“They give a friendly and warm welcome for what this community is about,” Alfred said of the pieces.

Lydick completed the project by mostly referencing black and white photographs and using a projector technique “to get the spacing right.”

Lydick cited the Janis Joplin portrait as a particular inspiration in getting the work done and how the celebrity “was a great opportunity to keep me focused.”

“I talked with Janis a lot. I played her music… God, she was such a great character,” Lydick said.

In terms of her favorite portrait of the bunch, Lydick credited the Bum Phillips piece.

“Bum is my favorite. His (piece) was so spontaneous and loose and fresh.”

Lydick has been an artist operating out of Beaumont for 10 years.

She earned a Bachelor of Fine Arts in drawing from Texas State University and a Master of Arts in painting from Lamar University.

“I’m always collecting photos of texture, colors and patterns,” Lydick said. “Each project I’ll rifle through them and create a color board.”

For the airport portraits, Lydick said she kept the people and ideas of Southeast Texas in mind when she used those colors to create the portraits.

“To me, anything leafy and green represents this area. We have palms and ferns… We have lush, green landscapes just from the swamp.”

Lydick explained her method of contributing to the community by way of her art.

Lydick also explained the significance behind the pricing points and meanings of some artists’ work.

“If you’ve ever wondered why art costs so much, it’s because you’re paying for that person’s history and experience,” Lydick said.

“Say an artist painted a red dot, and some people would ask why pay so much for a red dot.

“But they’re paying for the action that that human being took in painting it, listening to it, dealing with it — all that goes into the painting.”

“It’s because you’re sensitive enough to pick up what the artist was going through,” she said.

Lydick named that as one of the reasons why Vincent van Gogh’s work was so “poignant and special” — the emotion and history that went into its creation.

“You’re paying for the soul that they put into it.”

Voters in Jefferson County are looking to seat a new sheriff with the Nov. 8 election. Mitch Woods, who served... read more