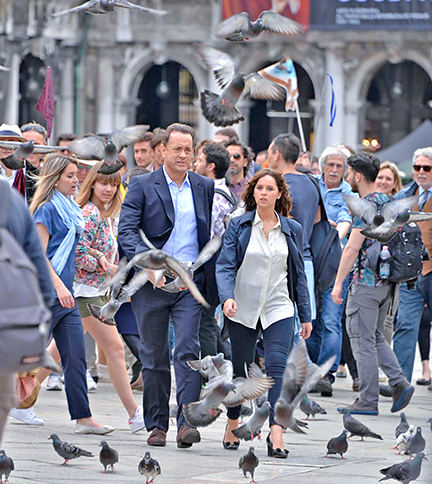 Felicity Jones teams up with Tom Hanks in the movie adaptation of Dan Brown’s “Inferno.”

Remember when Dan Brown’s “The Da Vinci Code” was the hottest book on the New York Times Best Seller List? I devoured that novel over one weekend and immediately went searching for Brown’s other works of fiction. I read four of his books in a row, and certainly thought that I would have been first in line to read whatever else the author might publish in the future.

Fast forward a dozen years and Brown has completely fallen out of the popular zeitgeist. I didn’t even know that he had written “Inferno,” another Robert Langdon book, until it popped up on my movie release calendar. A quick Wikipedia search tells me that he’s also written “The Lost Symbol” back in 2009.

Obviously I have some catching up to do.

In “Inferno,” the movie adaptation which arrives in theaters this weekend, Tom Hanks is back playing the religious history professor Robert Langdon. The movie begins with a bit of a mystery, as Langdon wakes up in a hospital, confused because he’s been shot and is also suffering from a wee bit of amnesia.

If that’s not enough to worry about, those mysterious assassins are still trying to silence our hero. It all has something to do with a megalomaniacal billionaire (Ben Foster) who thinks that overpopulation will surely doom our planet, so the logical solution is to release a plague that will cull the human herd. Naturally, the best way to save humanity is to search Dante’s “Inferno” for clues.

It doesn’t make a whole lot of sense, although credit the actors and filmmakers for giving us a movie that is polished enough to make you forget about the absurdity of everything that’s happening up on the movie screen. Hanks is as likeable as ever. Felicity Jones is good playing Langdon’s plucky gal Friday while Foster and Irrfan Khan are just menacing enough to give our hero some daunting challenges to overcome.

Visually, the film once again gives us plenty of postcard perfect shots that will make you want to dust off your passport. Less successfully, the film also features some quite jarring images of Dante’s version of hell. They’re well done, but shocking enough to pull you out of what’s going on in the rest of the story.

That’s not necessarily a bad thing, as it’s the story that mostly dooms “Inferno.” The amnesia subplot is ludicrous as Langdon can’t recall simple memories, yet has no trouble with the arcane details from religious history. The motivation of the villain is laughable while the solving of the central mystery offers little audience satisfaction.

Which is probably why Sony Pictures is dumping “Inferno” over the Halloween weekend—a time when most people prefer to spend their time at Halloween parties rather than take a trip to the Cineplex. Sadly, “Inferno” is more of a trick, than a treat.

THE MOVIE GUY: Falling flat with the ‘the Joneses’

I think that comedian Zach Galifianakis is a very funny man, although you might not agree with me given his... read more