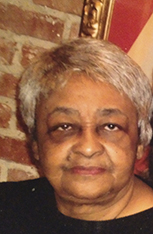 Bertha Washington of Port Arthur, Texas received her Heavenly Wings and went to be with her family in glory on October 18, 2016.  A native of Youngsville, LA.  She was born on August 1, 1933 to union of Lorena Green and Dennis Cormier.  She was a resident of Port Arthur for over 60 years and was a member of Rock Island Baptist.

A visitation is scheduled on Saturday, October 29, 2016 from 12:00pm to 2:00pm.  Funeral services begin at 2:00pm, at Rock Island Baptist Church Rev. Kevin McGlory officiating.  Burial to follow at Live Oak Cemetery under the direction of Gabriel Funeral Home.

She was preceded in death by her husband, Melvin Washington, brothers- Harry, Melvin, and Alvin Hebert and Frank Green Sr.; sisters, Gloria Sinegal and Virgie Hebert, and a host of beloved family members.