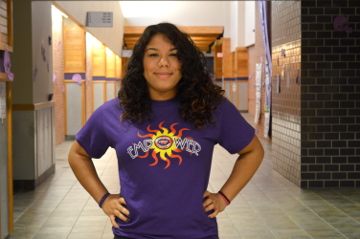 Deja Garlington, a senior at Port Neches-Groves High School, dons a T-shirt featuring a logo she designed that will be worn by teachers and staff during the school year. Mary Meaux/The News

The talented Port Neches-Groves High School senior put her thinking cap on and created a design for a T-shirt that will be worn by Port Neches-Groves Independent School District teachers and staff members during the 2016-2017 school year.

Her chosen logo features a yellow and orange sun with wavy, colorful rays with the word empower in all capital letters.

“I had to think of something an adult would want to wear but also be fun,” Garlington said.

She knew there was a specific pallet that required certain colors and put her artistic skills to use.

“Deja is one of my most talented and hardworking students. She is very creative and dedicated to al art mediums,” Bryan said. “I was so excited when I heard her design was chosen. It is not a surprise to me that she won the contest.”

Garlington said she had hoped she would win but would not have been disappointed had she not.

A quick flip through her phone showed numerous works of art she had created, stunning, life-like portraits, unique ceramics and paintings.

Garlington’s academic and after school schedule is pretty full. She was in the high school band but quit when she began working after school.

At one time she was an active member of the Spanish Club and the Key Club but it is art that takes a big spot in her life.

She recalled a time she volunteered at the high school Trunk R Treat and worked at a face-painting booth. A little girl around 10 years old came in and she happily applied designs and paint. The girl’s dad came by later to thank her, something she didn’t feel she needed for doing something she loved to do.

“He said the girl’s mom had died the month before and he hadn’t seen her (daughter) smile in a long time,” she said.

Outside of school Garlington works as a “bus girl” at The Neches River Wheelhouse. She began in a different position and campaigned to be moved to the typically male dominated job duty making more money.

Garlington wants to use her artistic talent in a career in marketing. She plans to attend Lamar University and later transfer to the Art Institute of Houston. This would include working on commercials and logos and as an at director meaning she would need to be skilled in art and graphic design.

“I’d like someone to ask, can you do a logo for my company,” she said, imaging getting requests from Disney or Pixar.

She also knows that she will first need to build a portfolio and a client base, something she is ready to do when she gets to college.

PORT NECHES — Amanda Adams and Sarah and Max Cropper wanted to get out and enjoy the fantastic weather on... read more