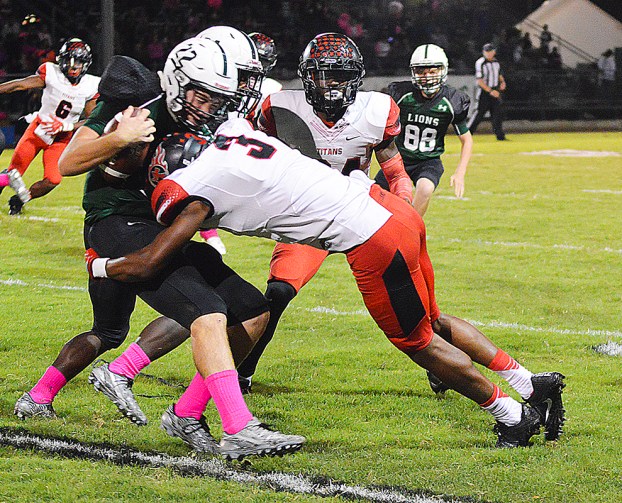 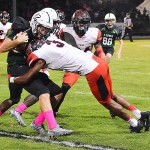 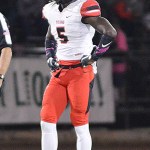 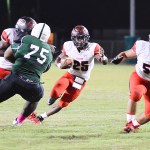 The win improved the Titans to a perfect 8-0 overall and 6-0 in district play. Memorial had already clinched a playoff spot in last week’s win over Port Neches-Groves and now has its sights set on closing out a district championship.

“We made a lot of mental mistakes that we need to improve upon, and we didn’t take advantage of all our opportunities in the red zone,” said Memorial head coach Kenny Harrison following the win. “Our defense did a tremendous job of holding them down offensively. We just have to continue to get better.”

Elijah Hines led all rushers with 110 yards on 16 carries with two touchdowns, all of which came in the first half as he just watched from the sidelines in the second half with the game in firm control. Kobi Martin added 60 yards on five carries and a touchdown.

Kadon Harrison completed 15 of 26 passes for 193 yards and two scores. He also rushed six times for 18 yards and a touchdown. His main target was De’Andre Angelle, who caught six passes for 53 yards, including a 22-yard touchdown reception.

The Titans defense held the Lions to 0 yards rushing and just 32 yards passing. They also forced two fumbles and intercepted two passes. Kary Vincent Jr. returned one of the interceptions 49 yards for a touchdown.

“Our defense takes a lot of pride in being the number one defense in the district,” said Harrison. “They work extremely hard and we have a lot of team speed. They just take pride week in, week out in limiting what offenses can do.”

Already leading 33-0, Memorial kept up the pressure with another score midway through the second half. The Titans turned the ball over on downs in their possession to open the third quarter. The two teams exchanged interceptions before Memorial mounted its first scoring drive of the second half.

Taking advantage of great field position at the Livingston 36, Martin rushed for 15 yards and Ben Gordon followed with a 17-yard run to the Lions 5. Martin scored a play later on a 5-yard run to push the lead to 40-0 with4:06 left in the third.

On the Lions ensuing possession, Vincent intercepted a Hunter Bland pass and weaved his way through traffic en route to a 49-yard interception return for a touchdown.

Vincent now has seven interceptions on the season, returning three for touchdowns. He limited Livingston receiver Christian Mitchell to 13 yards on one reception. Mitchell was ejected from the game in the second quarter after Vincent broke up a pass. He came into the game as the leading receiver in District 22-5A.

The Titans closed out the scoring early in the fourth quarter. Harrison hit James Francis over the middle for a short completion and Francis broke numerous tackles before finally getting brought down at the 1 for a 45-yard gain. Gordon capped the quick two-play drive with a 1-yard plunge to make the score 54-0 with 10:31 remaining in the contest.

Livingston recovered a fumbled handoff at the Memorial 43 with 6:29 remaining in the game, which marked the first time the Lions had been in Titans territory all night. Bland completed a pass to BJ Mottu for 11 yards on third down to keep the drive going and Bland called his own number for a 20-yard gain, which included him recovering his own fumble at the Titans 9. A bad snap and a quarterback sack pushed the Lions back to the 27 and the drive ended without Livingston mounting a serious scoring threat.

“In order for us to get where we want to be, we can’t sputter on offense,” said Harrison. “We’re going to have to get back and work on some things offensively. We did some good things on offense tonight, but we still have some things to clean up.

“It’s good to have things to work on and clean up following a win though. I feel good about getting the win and improving to 6-0 in district.”

The Titans started the scoring less than four minutes into the game. After forcing the Lions into a quick three-and-out on the game’s opening possession, Memorial went to work from the Livingston 45. Hines rushed for 25 yards on the Titans first play from scrimmage.

Four plays later, Martin carried for 15 yards to the Livingston 1. Harrison called his own number on a zone read play and out sprinted everyone to the right pylon for the game’s first score and give the Titans a quick 7-0 lead with 8:08 left in the first quarter.

Memorial squandered great field position on its next possession. Taking over at the Lions 25, the Titans couldn’t get anything going and turned the ball over on downs following an incomplete pass on fourth-and-7 from the 22.

It was back to normal for Memorial on its third possession. Harrison hit Rickey Thomas for eight yards on third-and-five to keep the drive going. Consecutive runs of nine and eight yards by Hines put the ball at the Lions 31. Harrison hit Angelle for 13 yards to the 10. Hines did the rest, rushing for seven yards and closing out the drive with a 3-yard touchdown run to make the score 14-0 with 2:01 left in the quarter.

The Titans defense forced a fumble on the first play of Livingston’s ensuing possession, taking over at the Lions 41. The drive looked to be stalled as Memorial lined up to punt the ball on fourth-and-10. However, the snap went to the up back, Keitha Jones, who ran the ball all the way down to the 1. Hines scored on a 1-yard plunge on the final play of the quarter. A low snap led to a missed extra point to make the score 20-0.

Memorial added two more scores in the second quarter. Following a pair of incompletions and a chop block penalty, the Titans elected to go for it on fourth-and-goal from the 22. Harrison found Angelle in the left corner of the end zone for a 22-yard scoring strike to give Memorial a 27-0 lead with 4:37 left in the second quarter.

The Titans closed out the scoring on a 30-yard strike from Harrison to Adrian Williams to make the halftime score 33-0.

Jamaal Charles and Super Mario have one thing in common: They are title characters in a series of video games.... read more