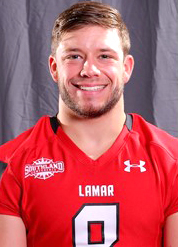 • Lamar coach Ray Woodard, on the color scheme of the Estes Stadium field: “Of all the everything we’ve got to get ready for this week, that’s way down the list. It’s the guys in uniform for Central Arkansas that makes them good. It looks good on television, but other than that, it’s just a football field.”

• UCA coach Steve Campbell, on Lamar: “We know they’ll come in here with a lot of confidence. They definitely have our guys’ attention. We like where we’re at, but we know you are only as good as your last time out. We need to play well this week in order to have a chance to beat a good Lamar football team.”

More than a month since its last defeat, Lamar’s path to a potential Southland Conference championship and NCAA playoff berth goes through Conway, Ark., about 30 miles north of Little Rock.

Unfortunately for the Cardinals, the journey must continue without All-America running back Kade Harrington.

No. 20 Central Arkansas, a team that has beaten Arkansas State and shut out  defending Southland champion McNeese State, will be the first opponent Lamar (3-3, 3-1) takes on without Harrington, a senior who was ruled out for the season Tuesday with a torn ligament in his foot he sustained last Saturday against Northwestern State. The Cards are turning to true freshman Austin Krautz of Nederland and redshirt freshman Derrion Randle to carry the load out of the backfield.

“Here’s Lamar’s deal,” he said. “They are 3-3 riding a three-game winning streak. They come in as a hot football team.”

Earp is the reigning Southland Offensive

Player of the Week after throwing for 412 yards and four touchdowns, the last one going to DeWan Thompson with 6 seconds left in the 32-31 win over Northwestern State.

The Bears, however, are 5-0 all time against the Cardinals, all since 2011. Quarterback Hayden Hildebrand has 1,415 yards and nine touchdowns passing and averages nearly 7 yards per carry, while helping the Bears average almost 480 yards per game. UCA’s offense ranks second in the Southland in scoring offense at 38.3 points per game, while its defends leads the conference in scoring defense at 18.

Central Arkansas is one of eight collegiate fields in America whose playing surfaces are colored. The colors purple and gray alternate every five yards except between the 45-yard lines, where it’s all gray, and the end zones are black.

UCA’s running game racks up 235.5 yards per game, and that could be a problem for Lamar. The Cards have given up 283.7, although they’ve been solid defending the pass at 147.7 allowed, mainly with the help of senior cornerback Brendan Langley. His 1.0 interception-per-game average leads the FCS, and his six total picks ties Lorenzo Jeremore of St. Francis (Pa.) for the national lead.

Earp has more targets to rely on after two of his receivers achieved season-highs last Saturday against Northwestern State.

Senior Martell Hawthorne had four receptions for 60 yards, one more catch than he had all season while battling different minor injuries.

“He came into camp as a starter, but he just stayed hurt and kind of fell behind,” Woodard said. “But he’s healthy and you should see a little more of him as we go down the stretch.”

Sophomore Zae Giles easily had his best game as a Cardinal with nine catches for 108 yards. Thompson’s four catches for 139 included his only two touchdowns of the season — an 86-yard play and the game-winner from 22 yards out.

There was no official word as of Friday afternoon on the availability of senior Michael Handy (concussion), who played his first game after a five-game suspension and caught a 10-yard TD pass.