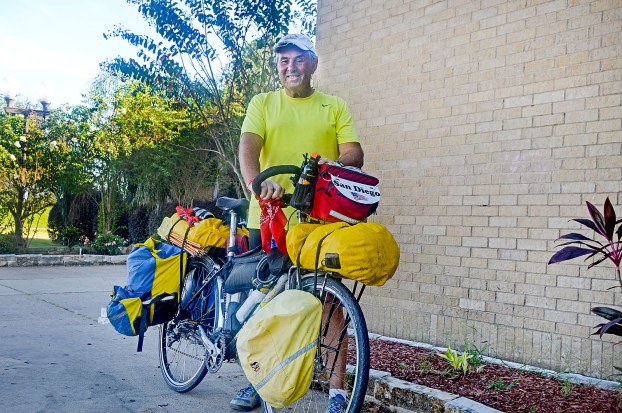 A man, a bike, a sprawling country

They say that a journey of a thousand miles starts with one step. For Jack Day, that first step is a bicycle ride worth thousands more.

Day is a 72-year-old retiree who has decided to test himself once again by crossing the majority of the continental United States by cycling.

His solo bicycle tour started in Des Moines, Iowa, went down the Mississippi River to New Orleans and will continue west to San Diego, Calif.

Day’s route brought him by Port Arthur, where he will be taking advantage of a local’s hospitality.

It is not his first cross-country ride either.

“It actually started as a self-dare,” Day said. “To see whether I could go across the U.S. by bicycle.”

His first trip totaled about 4,000 miles and took about 4 months to complete.

“I started at Golden Gate Bridge in San Francisco and ended in Times Square, New York,” Day said. “After I finished it, I was relieved; but, I also realized it was probably the most fun thing I’ve ever done.”

Day did not break the bank his first time crossing the country either.

“I got a lot of upturned noses from cycle enthusiasts,” he added with a laugh.

Ironically enough, Day was never what he would call an athlete.

“I cycled a little bit before,” he said. “My son was getting into a triathlon and he didn’t want to do all three activities himself, so we split it up.

“I did the cycling; his sister did the swimming; and he did the running.”

Apparently, the cycling was something that appealed to Day.

“I also did the RAGBRAI (Register’s Annual Great Bicycle Ride Across Iowa),” Day said. “It’s organized by the Des Moines Register and is a border to border ride from the Missouri River to the Mississippi River.

Still, Day did not consider himself a fitness enthusiast or health nut, just an active person.

And in doing it, he also found himself inspiring others.

“It was wonderful. After I completed my first race, I would get letters from people saying that I had inspired them to do stuff ….

“Another reason (I go out), I know a lot of guys my age whose legs have given out.”

For Day, it’s not only about inspiring, but also about doing what he can with what he has, namely himself.

“I’m doing it for you (those who can’t ride). I can do these things, and it would be wasteful if I didn’t do it.”

On average, Day rides 40 to 45 miles a day; although, sometimes that number could go as high as 70 depending on the weather, terrain and condition.

In discussing how one packs for such an epic journey, Day was quick to point out that waterproof bags are a must for serious travelers.

“It rains a lot more than you expect,” he said.

Day was also forthright in other preparation plans.

“You don’t get it right. After the first two weeks, you’ll look and see what you aren’t using and send it home.”

The wardrobe he packed was minimum, including two riding outfits and a spare dress shirt and pants.

In the more intangible lessons from the road, Day was equally well versed.

“The first thing you learn is that everyone you run into is proud of where they live ….

“The second thing is I don’t run into bad guys.”

Day was clear that in his daily encounters with people, he never had a bad experience.

“I might run into some rough areas, but everyone is nice to you.”

“I don’t have to worry about breaking down ….” Day said. “All I have to do is stick my thumb out, and someone will give me (and my bike) a lift in their car.”

In his positive experiences, Day made certain to mention his membership to Warm Showers, an online hosting group featuring cyclists who show hospitality to other traveling cyclists.

“I go on the map and see where members are,” Day said. “This trip, I expect to stay at around 70 homes.”

And with as much traveling as he does, Day meets all sorts of people.

“You’re meeting people of the town and they will tell you whatever is happening — in their towns, with their families …. It’s really cool.”

Day’s daughter lives north of San Diego, his current endpoint, and it is where he hopes to meet her in time for Thanksgiving turkey.

When asked what his son and daughter thought of his cross-country tour the first time he did it, Day grinned and said they didn’t take him seriously.

“They thought I had early onset something,” he said.

“But once I had made my way from San Francisco to Denver (Colorado), they started to assume I’d do it then.

On the topic of technology, Day considered it a great way to stay in touch with his family, friends and online community.

“It’s a different world out there,” Day said. “Most cyclists have smart phones, laptops and GPS trackers.”

As for his health, Day is in fine shape.

“I don’t have any physical problems and I don’t take any medications,” Day said. “That’s because of the riding.”

Day was also optimistic about cycling’s other benefits.

“By the time the ride is over, I have so much energy I feel like I can run up a mountain.”

Day had simple health advice for those looking to be a little more active: “You got to do something.”

“I want to inspire people to get out and do something, whether it’s mental or physical.”

In Day’s opinion, there’s nothing like life on the road, the people that he meets there or the places he’s seen:

The composition of Port Arthur based on 2010 Census