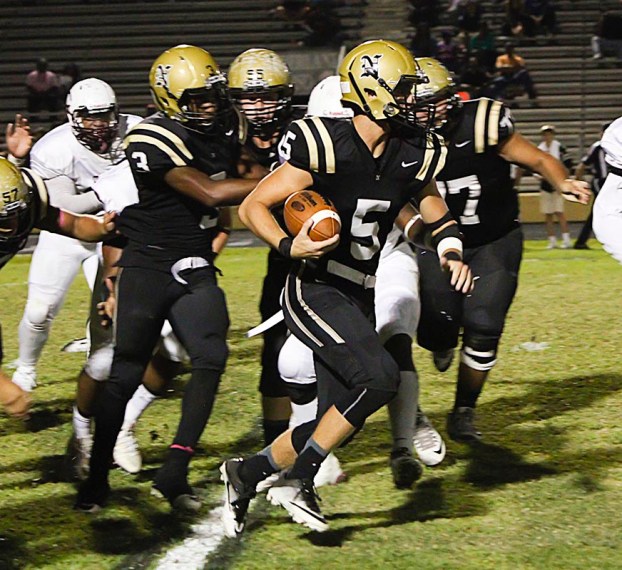 Garrett gets feel for QB role

NEDERLAND — Get used to seeing the name Reid Garrett when digging up information on the Nederland Bulldogs.

Garrett, who was not used a ton heading into last week’s game against Central, made quite an impression on coach Larry Neumann in a 28-21 win over the Jaguars.

“It was a fun night,” Garrett said.

It had to be fun for Garrett. He rushed for 39 yards on 10 carries with a touchdown and also hauled in a 15-yard reception.

Garrett also had 46 yards on 3-of-5 passing with a 15-yard touchdown toss to fellow-quarterback Marshall Lange.

“It felt great being back at quarterback,” Garrett said. “My line blocked for me really well to open some great holes and also did a great job pass blocking. That was my first time at quarterback since the sixth grade. I haven’t seen it since.

“I was a little surprised at first when I was told I would be out there at quarterback. I knew I had to step up because my team was counting on me.”

Neumann was not surprised at how well Garrett played at every position against Central.

“His performance did not surprise the coaching staff or his teammates,” Neumann said. “He has never really been in that light but he has all the abilities. Reid Garrett is good at whatever he does.”

Garrett’s play does not stop on the offensive side of the ball. Neumann said Garrett also sees time at safety and cornerback on defense.

“Reid has a great attitude,” Neumann added. “It doesn’t matter what is going on, Reid has that ‘Let’s go’ mentality.”

Garrett and all his Bulldogs teammates have had to have that mindset this year. The Bulldogs have had at least four players not be a part of the team since the offseason and also had to deal with a multitude of injuries.

“It has been rough since the offseason,” Garrett said. “We have made it through because of how coach Neumann prepares us. With the help of our coaches and all the players, we are still fighting for the playoffs.

“Each Friday night is a playoff game for us the rest of the year. It is certainly a different feeling than the last couple of seasons.”

He had a simple message as to why he stays so busy in sports.

“Why not do it?” Garrett asked. “I enjoy high school sports. This is a short period of your life, so why not make the most of it?”

SABINE PASS — Robin Vocale works at the lone gas station in the community, and she’s noticed a sense of... read more