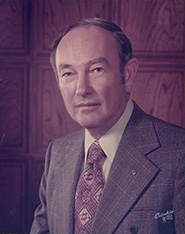 He graduated from Victoria High School in 1938 at the age of 15.  During World War II he served in the U. S. Army’s newly formed Army Air Corps.  In 1945 he moved to Beaumont, Texas, where he became an announcer at KRIC radio station. Two years later he helped begin KTRM radio where he worked for 14 years, first as an announcer and then as general manager.  In 1959 he joined KJAC-TV in Port Arthur as sales manager and soon afterwards became president and general manager.  He served in that position until his retirement in 1988.

Roy was preceded in death by his parents and his sisters, Clarella Shotts Enlow and Maurice Shotts Smith, as well as by his brothers, Billy Shotts and Bobby Shotts.  He is survived by his wife Dorthell Parish Shotts and his daughters and their husbands, Karen Shotts Neal and Hoyt Neal, Carlaine Shotts Blizzard and Richard Blizzard, and Candy Shotts Hunt and Ed Hunt.  He is also survived by his grand children Meghan Blizzard Deibel, Bindi Blizzard Nielsen and Glenn Nielsen, Sean and Emily Neal, and Jeremy and April Neal.  His great grand children are Roby Deibel, Cate Deibel, Harper Neal, Paxton Neal, Tristan Butler, Keegan Butler, and Nigel Nielsen.

A memorial service with military honors will be held on Monday, October 17, 2016, at 10:00 a.m. at Ted Dickey West Funeral Home, 7990 George Bush Turnpike, Dallas, Texas 75252.  Those wishing to send condolences or sign the online guestbook may do so at www.teddickeywestfuneral.com.

Loretta Ann Heid, 82, of Sabine Pass passed away on Saturday, October 8, 2016 at her residence. Loretta was born... read more