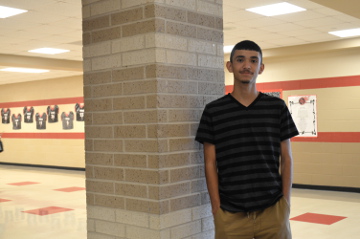 Memorial High School junior Sergio Sanchez recently came in first in the Gift of Life Ribbon Rush Color Run after running the 5K in 15 minutes. This was his first time to participate in a 5K. He is also a gifted soccer player hoping to go pro one day. Mary Meaux/The News

And he did — he finished first of the 6,000 people in the 5K run in just 15 minutes and was waiting at the finish line, trophy in hand, when his family followed some minutes later.

“My mom convinced me to do the run,” Sanchez, a Memorial High School junior, said. “My mom and grandmother are both breast cancer survivors and I did the race to raise money in their honor.”

A longtime soccer player, Sanchez said this was his first time to participate in a run.

“I told everybody I’d win first place,” he said. “My uncle came through eight minutes later and I was waiting at the finish line with the trophy. My mom was proud. I’ll run it again, for sure.”

Sanchez, 17, literally grew up playing soccer and started at the age of four. Besides playing for the MHS Titans he also plays for a league in Beaumont.

“I go to school, work and play soccer,” he said of how he spends his time. “There are no days off, not even weekends.”

“My family motivates me and inspires me to succeed,” Sanchez said.

“After playing on the junior varsity and sophomore teams his freshman year, Sergio easily made the varsity as a sophomore,” Hoverson said. “Not only did he make the varsity team, but he started every game. At the end of the season, Sergio was named to the all district team, earning honorable mention. At times while playing soccer, Sergio would become so dominant as to take over games. If he noticed that one of this teammates was not playing well, Sergio would increase his intensity so as to “pick up” his teammates.”

Besides being a gifted athlete, Sergio is also an excellent student and has never failed a class in 11 years of school. He is also active in his church and is an excellent citizen at school, the coach said.

“The future is very bright for Sergio,” he said. “He has an excellent chance to earn a soccer scholarship, which is one of this goals. If that doesn’t work out, he would most certainly be offered a scholarship as a long distance runner, as we all found out a few weeks ago.”

Marching bands, elementary schools and royalty made their way down Procter Street for the annual cavOILcade parade on Saturday. The... read more