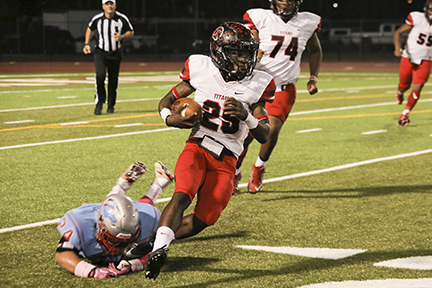 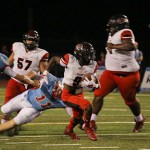 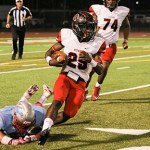 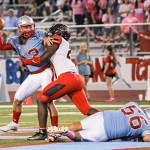 LUMBERTON — Let the talk begin in Mid- and South County.

The Port Arthur Memorial Titans defeated the Lumberton Raiders Friday 27-7 to set up a first-place showdown with the Port Neches-Groves Indians. PNG defeated Vidor 41-22 Friday, so both the Indians and Titans come into next Friday’s game 4-0 in District 22-5A.

“It is exciting,” Memorial coach Kenny Harrison said of facing the Indians for the first time in Titans’ history. “It is going to be exciting for both programs. I am looking forward to it. This is what everyone in this district has been waiting for, for us to play each other. The opportunity is here, so both teams are going to be ready to go.”

The Titans first had to deal with the Raiders, who would never really go away Friday. Lumberton tried to play ball-control on the Titans and keep the ball away from the explosive Memorial offense.

Memorial ran 50 plays compared to Lumberton’s 40. Elijah Hines was the difference maker with 203 yards on 16 carries.

Lumberton drained a lot of the clock in the first quarter, so the Titans and Raiders were tied 0-0 going into the second.

Hines took over with a 46-yard touchdown run with 7:30 left in the second to put the Titans on the board, 7-0. The junior running back did it again about 5 minutes later when he hauled in a 29-yard touchdown pass from senior quarterback Kadon Harrison. The score put the Titans up 14-0 at the break.

“They [Raiders] did a good job of controlling the clock and running the ball,” Harrison said. “The good thing about it is we will see a couple more times like that this year. It was good for our guys to get a win playing this style of football. We need to learn to take advantage of our offensive opportunities.”

It was a defensive opportunity that put the Titans up three scores in the third.

Junior lineman Dontrell Scott scooped up a Lumberton fumble and ran the mistake back 8 yards for a Memorial touchdown. The Titans took a 20-0 lead.

Lumberton returned the favor right before the end of the third when Braden Carter scored on a 43-yard fumble to give the Raiders their only score of the game.

Hines scored the game’s last score in the fourth on a 59-yard run.

“We worked on being patient all week in practice,” Hines said. “We played hard. That is a good football team.

“I have to credit my offensive line tonight. They made me some big holes and allowed me to make my cuts and get into the end zone.”

The Titans’ defense held the Raiders to 147 rushing yards on 41 carries, an average of 3.58 yards per carry.

Lumberton quarterback Brett Marcantel came into the game as the fourth-leading rusher in the district, but he was held to 59 yards on 22 carries. Keaton Upshaw had 68 yards on 13 carries to lead the Raiders.

Valsin and Cedric Lee both had sacks for the Titans while Kobi Nixon and Braydon Williams each recovered fumbles.

Harrison ended his night with 136 yards on 18-of-30 passing with one interception. DeAndre Angelle led the team with five receptions for 18 yards.
•
Gabriel Pruett: 721-2436. Twitter: @PaNewsGabe

PORT NECHES — One first-place game down, another to go. Port Neches-Groves scored 28 unanswered points in coming from their... read more