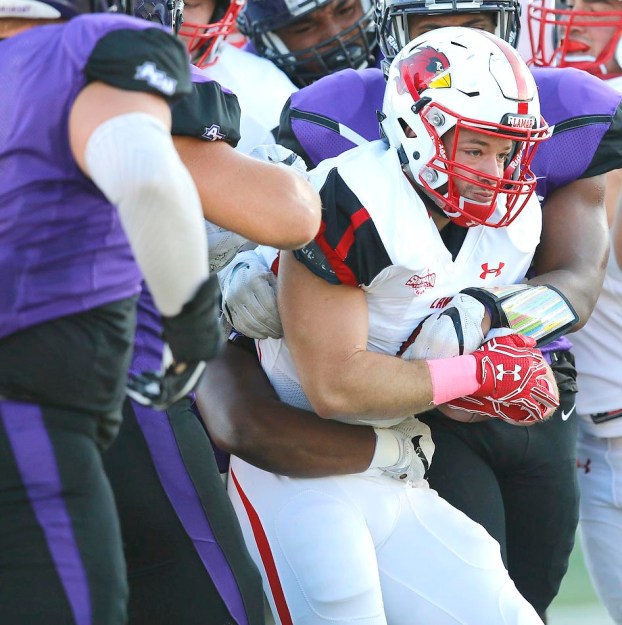 Cards stay on a roll at ACU 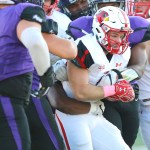 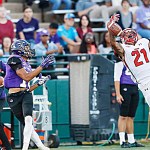 ABILENE — The Lamar Cardinals made it consecutive wins on the season by knocking off Abilene Christian, 38-10, Saturday evening at Shotwell Stadium.

The Cardinals (2-3, 2-1 Southland) continue their dominance over ACU in Abilene improving to 7-2 all-time on the road in the series. It marks the first time LU has recorded back-to-back victories since defeating Incarnate Word and nationally-ranked McNeese State to close out the 2014 season.

The Cardinals racked up 520 yards of total offense, including 309 on the ground. Senior Kade Harrington finished the night with the 17th 100-yard rushing game of his career. The Kingwood native carried the ball 23 times for 145 yards and a touchdown. He also hauled in two passes for 89 yards. Big Red held the Wildcats (0-6, 0-4 SLC) to 306 of total offense. The Cardinals also held the football 16 minutes longer than ACU.

Senior Carson Earp was once again effective at quarterback. The Robinson native completed 16 of 19 passes (.842) for 211 yards and a touchdown.

“This is a very tough place to play. It is a long road trip,” said Lamar head coach Ray Woodard. “We weren’t good early but just kept fighting through some things. That is two complete games for us. We are really starting to jell together as a team.

“When you go one the road, you have to be two touchdowns better than you are at home. We were just not good early, but fortunately our defense kept us in it. We are playing good team football right now.”

The Wildcats took the opening drive and moved the ball deep into Cardinals territory before the drive stalled out. ACU had the ball down inside the Cardinals’ 20, but a fumble halted the drive forcing ACU to send on its field goal unit. Nik Grau converted a 22-yard field goal to put the Wildcats on the scoreboard. Grau’s drive-saving kick would be the team’s only score of the half.

The Cardinals appeared to be driving for a score of its own midway through the quarte,r but LU’s drive stalled and senior Alex Ball came on to attempt a 47-yard field goal. The Wildcats, however, dodged a bullet by blocking the kick. The Cardinals defense didn’t allow ACU to gain any further momentum after the play as they kept their hosts off the scoreboard until the offense could get going.

Big Red took its first lead of the game early in the second quarter. They capped a nine-play, 81-yard drive with a 38-yard run around the right side from sophomore Zae Giles. The Cardinals were back on the attack after the defense forced the Wildcats to the punt the ball away on its next possession.

The Cardinals once again used a time-consuming drive moving the ball down to the ACU 4-yard line to set up a 22-yard field goal attempt from Ball, which he booted through the uprights. The Cardinals tacked on their final score of the half with less than a minute remaining. Earp found Giles in the back of the end zone from 6 yards out to give the Red and White a 17-3 lead heading into the locker room.

The Cardinals held the ball nearly 11 minutes more than their hosts in the opening half as the racked up 327 yard of total offense, including 177 on the ground. LU held the Wildcats to 161 yards, but were penalized eight times for 55 yards in the first 30 minutes.

The Cardinals jumped on ACU for two quick scores in the third quarter to put the game out of reach. In what is becoming a common sight for LU fans, the Cardinals first score of the second half was set up by a Brendan Langley interception — marking his third consecutive game with a pick. Langley intercepted the pass on the ACU 40 and three plays later the Cardinals pushed it across the goal line with a seven-yard carry from DeWan Thompson.

LU’s defense forced a punt on the Wildcats next possession. Harrington capped the eight-play, 76-yard drive with a 28-yard scamper down the right sideline for the score. ACU responded with its first points since early in the first quarter when quarterback Parker McKenzie hit Cody Ennis from 6 yards out on fourth down.

The Cardinals closed out the game with one final score on a 19-yard run from freshman Austin Krautz of Nederland.

The Cardinals return to action Saturday when they host Northwestern State. The game against the Demons is slated to kick off at 6 p.m. at Provost Umphrey Stadium.

PORT NECHES — One first-place game down, another to go. Port Neches-Groves scored 28 unanswered points in coming from their... read more