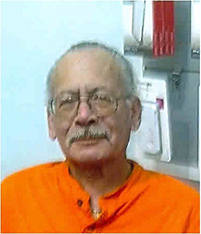 He was born on March 17, 1947 to Maria Ignacia Porras and Regules Porras in Mercedes, Texas. Leo graduated from Thomas Jefferson High School in 1965. He served in the U. S. Navy aboard the USS Ranger and USS Saratoga during the Vietnam War. Leo retired from Gulf-Chevron with 35 years in maintenance. Leo enjoyed jogging, martial arts and most of all Leo loved dancing and going on cruises with his soul mate, the love of his life, his wife. Their favorite song was “At Last” by Etta James. Leo was an active member of American Legion Post #493 and Fraternal Order of Eagles #3743.

He was preceded in death by his parents, his sister, Lydia Sullivan and his daughter, Tonya Lynn Porras.

Memorial service to honor Leo’s life will be celebrated at 10:00 AM Thursday, October 6, 2016 with full military honors at Clayton Thompson Funeral Home. Arrangements for cremation are entrusted to Clayton Thompson. His cremains will be entombed at Houston National Cemetery at a later date.