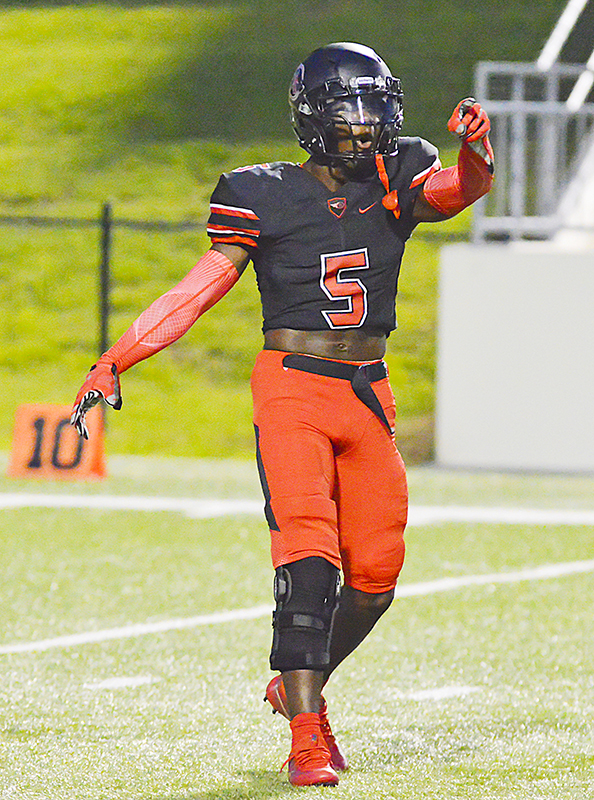 Imagine a world where Kary Vincent Jr. was a starting cornerback for someone else besides the Port Arthur Memorial Titans.

Titans coach Kenny Harrison doesn’t want to think about it, but it could have happened.

Kary Vincent Sr. brought his son to Memorial High School when his son was in the seventh grade. Vincent Jr. was enrolled in Houston’s Alief ISD at the time and was living with his mother.

“The first thing was I wanted to get Kary out here with me,” Vincent Sr. said. “I had Kary at a young age out of wedlock. I made a promise to his mother once he got to the seventh grade I would get him and she would allow me to raise him to become a respectable young man.

“That was No. 1. The next thing was to get him here and into Pop Warner. He showed some abilities at a young age that were like a man amongst boys.”

Vincent Jr. said while it has been a pleasure playing under his father, it hasn’t always been a walk in the park.

“Everyone one of the guys on defense will tell you I sometimes have it harder than anyone,” the younger Vincent said. “I have learned a lot under him. It hasn’t always been easy but it has been great for both of us at times.”

The eldest Vincent played receiver at Texas A&M and was drafted in the sixth round of the 1992 NFL Draft by the New Orleans Saints. He was drafted as a defensive back and also played receiver for two years in the Arena Football League with the Charlotte Rage (1994) and Milwaukee Mustangs (1995).

Harrison remembers seeing some video of Vincent Jr. even at a younger age.

“I remember watching Kary when he was 8 or 9 years old in Houston off his dad’s video and I knew at that time that the kid was special,” Harrison said. “I didn’t know he would turn out to be the way he is now, but I knew that kid was special.”

Special is a great way to describe the role Vincent is on right now.

He has five interceptions in his last four games. Vincent has two interception-return touchdowns last week in the first quarter against Nederland.

Vincent’s first return went 65 yards to put the Titans up 14-0. He later returned an interception 45 yards and Memorial took a 28-0 lead.

“The football is looking real big right now,” Vincent Jr. said. “Anytime you have five picks in four games, it’s exciting. We were playing with a lot of emotion as a team. Fortunately, I was able to do that in the first quarter. I believe it set the tone for the rest of the game.”

The Titans’ defense has gone from a team that gave up a lot of yards and a lot of points real quick in District 21-6A the last several years. Memorial now leads District 22-5A defenses at 162.2 yards per game. The Titans have given up 25 points in three district games this year.

“I don’t feel there is much difference with our defense from last year,” Vincent said. “I think our defense is just comfortable now. We have guys that have been on varsity three-plus years. The comfort level is high right now and it is showing in our play.”

Harrison realizes the days of Vincent grabbing interceptions for Memorial could come to an end a lot sooner than he would like but not for the obvious reasons.

“I can foresee it where teams will not throw his way at all,” Harrison said. “It really isn’t a bad thing. I welcome teams to continue to throw the ball his way but I can see people locating where he is and going the opposite way.

“That is when he is going to have to become the ultimate team player and understand that role is just as big. That would take away half the football field. That would be nice.”

Vincent’s eyes have been locked on more than just quarterbacks and footballs these days. He also watched as events unfolded in Baton Rouge, La. after LSU fired head coach Les Miles.
Miles was fired after the Tigers started 2-2 and came a day after LSU lost to Auburn, 18-13.

Ed Orgeron was named the interim coach in place of Miles.

“Being committed to LSU is a great feeling,” Vincent said. “I am happy I did it. The last couple of weeks have been hectic. I had a great relationship with Coach Miles and now that he is done with the program, it was hard to see them let him go.

“I am committed to the school and not the coach. I am 110 percent committed to LSU. I have talked with the coaches there and we are good.”
•
Gabriel Pruett: 721-2436. Twitter: @PaNewsGabe