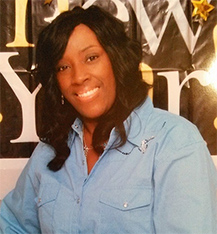 On February 15, 1975 Sonia Gayle Jones entered this world in Rayne, LA to late Wilton William Jones and Alice (Brown) Jones. She was the older of two children from this union which also produced a younger sister named Pamela Lynn Jones (Lee). From a previous paternal relationship Sonia was blessed with a half-sister named Thomesa Hollins. During her lifetime, she was blessed with two daughters and became a proud and devoted single parent to Monique Renelle Jones and Kyler DeNelleJones. Sonia was called home on September 20, 2016 at MD Anderson in Houston, TX after a long battle with Cancer.

Sonia was a student of Abraham Lincoln High School in Port Arthur, TX and graduated in 1993. Upon graduation, she attended Lamar State College-Port Arthur’s cosmetology program from 1994-1995 and later enrolled in the medical office assistant program at Lamar State College-Orange in 2004-2005. Throughout her life, Sonia has held many positions in the medical field. She was a Certified Nurse’s Assistant (CNA) as well as a Medical Assistant. In her later years in the medical field, she met Dr. Chad Hammett and became a devout employee and patient to his medical practice.

Just as much as she enjoyed her time with her children and her job, she also enjoyed trail riding. So much so, that she even once belonged to a trail ride organization and traveled many destination down I-10 to show support to other organizations as well as her favorite Zydeco performers. When she was not trail riding, she was out supporting her daughters in their extra-curricular activities. She was a true definition of a “Band Parent” and “Cheer Mom” who barely missed a game to show her children that she was their “Number One Fan.”

She is preceeded in death by her father, Wilton William Jones; her grandparents Adam and Alvina (Livings) Brown & William and Agnes (Francis) Jones; as well a host of family and friends.

Funeral service will be 10 a.m. Saturday, October 1, 2016 at Sacred Heart-St. Mary Catholic Church with visitation from 8 a.m. until service time. Burial will follow in Calvary Cemetery under the direction of Gabriel Funeral Home.