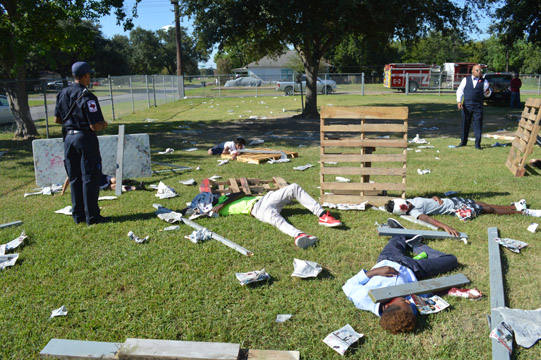 It was a warzone at Tekoa Academy as students and debris lay like leaves on the school grounds Thursday morning.

There was no cause for alarm; though, it was just an act.

“This is a simulation,” Charles X. White, school safety consultant, announced to the gathered students outside Tekoa Academy.

“And then we’ll get on a bus to go to St. Mary’s [Hospital], and they’ll have a crew accepting the injured and explaining what happens when you go into an emergency room.”

The simulation, or Mass Casualty Drill, was an event designed to raise disaster awareness for eighth to twelfth graders and to expose them to the medical prioritizing technique known as triage.

Members from the Port Arthur Fire Department and Acadian Ambulance Service were on hand to help run the simulation.

“It’s designed to make [students’] situational awareness broader and to give them insight to correct procedure and a view of general safety at home and school,” White said.

“This represents the highest level of engagement [for the students] and opens up talk about injuries.”

White was also optimistic about other benefits that the drill could produce.

“Think of it as a career builder for EMTs, firefighters, other first responders,” White told the assembled students.

“Because you’ll be meeting them. This will give knowledge for what happens in emergencies… and hopefully this will give inspiration for seeking careers in the medical field because you all are on the close track to college.”

The timing of such a drill was not lost on the school safety consultant, who remarked that September is Preparedness Month.

“We’ve been doing [drills] for five years,” White said. “September is Preparedness Month and we’re still in the middle of hurricane season, so this is important.”

White also stressed the value of having a regular practice in place for schools.

“But this is a Mass Casualty Drill, and it is the first time Tekoa has had it.”

White explained that he’s conducted these larger-scale drills in Houston before, but he felt they have a more relevant meaning now.

“It’s the eleventh anniversary of [Hurricane] Rita, and with the recent mass shootings on TV… this is important.”

In explaining emergency personnel’s openness to the drill, White said,

“Hospitals and fire departments and school districts have compliances that we have to do, like drills and safety talks.

“It teaches mainly to stay calm and if we do have a mass casualty event at the school, it’ll show the students what we’d do when we show up.”

Free explained that what he and his fellow firefighters do in such situations is best allocate the resources that time and circumstance allow for by treating the wounded on scene and categorizing them for advanced medical teams like nurses and doctors.

By doing this, people are tended to in a quick and orderly fashion and given a color tag based on the severity of their injuries. The color tag then gives medical personnel a better idea of what to expect at a glance.

“It’ll teach them a better understanding and perception of what we do,” Captain Prevost with PAFD said.