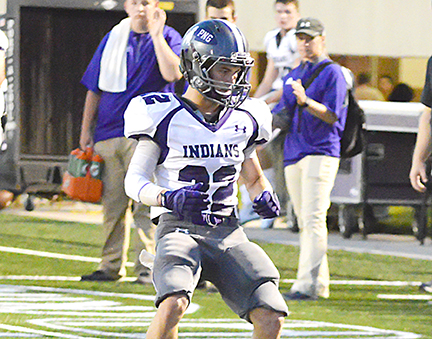 PORT NECHES — Port Neches-Groves senior cornerback Jacob Vaughn finally let it be known where the “Landshark” nickname for the Indians defense came from.

“It was [Anthony] Anniboli from last year,” Vaughn said. “He got it from Ole Miss and we just kind of went with it. It was a joke at first and then it took off from there.”

Vaughn is a two-year starter for the Landsharks at cornerback. The past two years the PNG defense has backed up the nickname by having the leading defense for District 22-5A in back-to-back seasons.

PNG is at third this year with 266.5 yards per game allowed, and Vaughn continues to be a big reason why the Indians have so much success on defense.

What PNG coach Brandon Faircloth points to about Vaughn is how great an athlete is even outside football.

“He is a starting center fielder on the baseball team,” Faircloth said. “He is a wonderful baseball player. He is one of those great two-sport athletes PNG has produced so many of. Vaughn fits right there along with them.
“He is not the biggest guy in the room but I would like to see someone challenge the size of his heart. He goes very hard every Friday night.”

Faircloth said it is heart and intelligence that makes Vaughn such a great football player. Vaughn stands only 5-feet-6 and he weighs about 140 pounds.

“Those are the attributes you have to have when you are his size to be a great football player,” Faircloth said. “Those attributes in Vaughn are through the roof. His game knowledge and technique are perfect.”

Vaughn realizes he is very undersized to be a defensive back. He has known it for a very long time. He just doesn’t let it stop him.

“It has always been that way,” Vaughn said. “I know I am never going to be bigger than anyone. It helps to practice against Keynel [McZeal] and Dylan [McGough] every day. Those guys are going to be a couple of the biggest guys you are ever going to see. So, practicing against them every day helps me get better.”

So how does a guy who is 5-6 take on a much taller receiver?

“It is all about being physical,” Vaughn said. “I do what I have to do. I enjoy the challenge. I love it. Every game is someone else and I have to figure out a different way to go against them.”

Vaughn and the PNG secondary had quite the challenge last week going against a very talented Livingston passing attack.

Now, for the next two weeks, PNG faces two offenses that use the Slot-T. It is a complete different change from the game against the Lions.

“I like going up against that type of offense,” Vaughn said. “The next two weeks are going to be very physical games. It is going to come down to whoever wants it more.”
•
Gabriel Pruett: 721-2436. Twitter: @PaNewsGabe